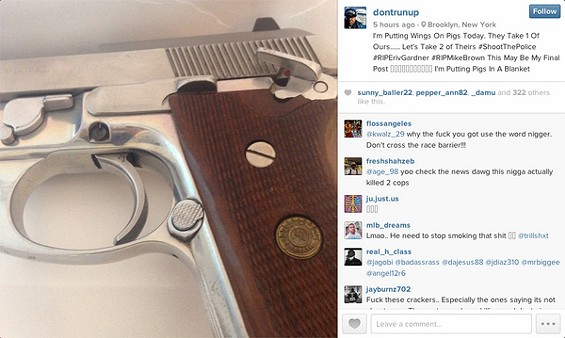 In an Instagram post 28-year-old Ismaaiyl Brinsley knew might be his last, Brinsley wrote that he wanted to avenge the deaths of those killed by police, especially eighteen-year-old Michael Brown, killed in August in Ferguson.

"I'm putting wings on pigs today," Brinsley posted on Instagram under a picture of a gun. "They take one of ours...Let's take two of theirs. #Shootthepolice #RIPErivGardner (sic) #RIPMikeBrown."

Two hours later, Brinsley ambushed officers Rafael Ramos and Wenjian Liu, shot them to death in broad daylight Saturday and ran away to a subway station, where he killed himself.

The execution-style shootings were seen nationwide as a reaction to the recent grand jury decision not to indict the police officer who choke-held Eric Garner to death in July after suspecting him of selling loose, untaxed cigarettes. That grand jury decision closely followed the decision here in Missouri not to file charges against former Ferguson Police officer Darren Wilson in the fatal shooting of Michael Brown.

Since Garner's death and the weekend double shooting happened in New York, focus on Brinsley's motive has stayed on Garner, whose last words -- "I can't breathe" -- have become a rallying cry for demonstrators protesting police brutality and racism.

But the shootings sent shockwaves to Missouri, too, especially since Brinsley named Brown before starting his rampage. Brown's parents, Lesley McSpadden and Michael Brown, Sr., released a small statement condemning the violence done in their son's name.

"We reject any kind of violence directed toward members of law enforcement," the family said through the Parks & Crump law firm. "It cannot be tolerated. We must work together to bring peace to our communities."

"Any use of the names of Eric Garner and Michael Brown in connection with any violence or killing of police, is reprehensible and against the pursuit of justice in both cases," Sharpton said.

My deepest condolences go out to the families and loved ones of officers Wenjian Liu and Rafael Ramos. Violence against police officers simply cannot be tolerated - ever - and I stand with all Americans in condemning this unspeakable and cold-blooded act. Our law enforcement officers have earned our respect and gratitude for the difficult, dangerous and important work they do each and every day. As we mourn the loss of these brave officers, I ask Missourians to join me in taking the time to reflect on the sacrifices our men and women in law enforcement make to protect and serve our communities.