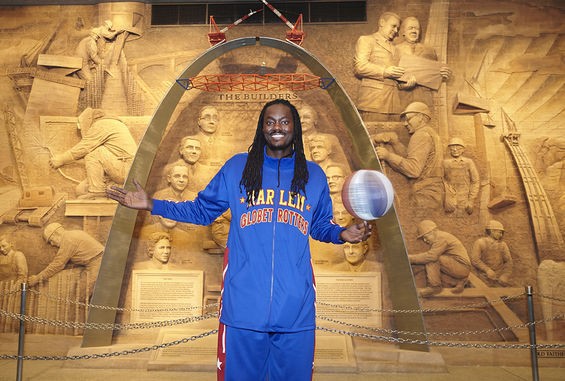 St. Louis doesn't have a professional basketball team, so it's not every day that a 6'6" dude invites us to visit the Gateway Arch with him. But we certainly weren't going to turn down Slick Willie Shaw, a forward with the world-famous Harlem Globetrotters.

Shaw was in town last week to speak to schools and check out the facilities at Scottrade Center, where the Globetrotters will play the Washington Generals on January 2. "We haven't played the Washington Generals in over five years, and the last time we lost to them was in 1971 at a buzzer-beater," Shaw says. "Those guys really think they can relive 1971 all over again?"

That kind of smack talk was what made us anxious to hang with Shaw during his downtime. A frequent St. Louis visitor, the ball-spinning expert was eager to explore downtown and take the cramped tram ride to the top of the Gateway Arch. Here's what we found out about this brilliant basketball buff:

FIRST TIME SEEING THE GLOBETROTTERS? HIS OWN GAME. The 32-year-old Shaw fell in love with basketball at age six and went on to become a starter at St. John's University. Like many kids, he loved watching trick-ball experts the Harlem Globetrotters play on television, but he hadn't actually seen the team in person until it was time to play his first game with them.

"Right then and there, I realized I was getting myself into something that was very special, you know? There were 15,000 people at Staples Center," Shaw tells Daily RFT. "My first game at the Staples Center, I'm like wow! 15,000 people? Harlem Globetrotters? It was breathtaking."

See also: A Day with Slick Willie Shaw of the Harlem Globetrotters (PHOTOS)

HE BREAKS LAMPS WHEN HE PRACTICES. Now in his eleventh season with the Globetrotters, Shaw has become known for spinning the ball in ways the NBA would frown upon. Not only can he spin on the tip of his finger, but he'll also do it around his body, behind his back and between his legs -- and sometimes with two balls at once! Of course, that kind of skill demands practice... and a few missteps.

"I definitely took the basketball to my room every day because my first year, I see those guys and they're handling a basketball, passing it, popping it, and the crowd's oohing and aahing, and I'm like 'Oh, man, I can't wait to get in there!' So I used to take my ball to the room every night to practice and try to come up with a routine," Shaw says. "I broke a couple of lamps, but it's OK, we wrote that off."

THE GLOBETROTTERS REALLY DO, UH, TROT THE GLOBE. Shaw has friends who play in the NBA, but he says he's enjoyed entertaining the crowd a bit more as a Globetrotter. But there's another big perk: travel. Shaw has performed worldwide for students, other athletes and troops, including on naval ships in the middle of the ocean.

"As an organization, we've been to over 122 countries and entertained over 140 million fans all over the world, so it's a beautiful thing," Shaw says. "Myself, I've been to 73 countries. I get a chance to go to the top of the Eiffel Tower in Paris, and in Rome I get to visit the Coliseum, the Great Wall of China, and things like that. [These are] places I'd read about when I was in junior high school, and now I'm here. The Harlem Globetrotters really live up to the word 'globetrotter,' and it's a beautiful thing."

WE SHARED SHAW'S VIRGIN ARCH EXPERIENCE Shaw was raised in the Bronx in New York City, but as mentioned, he's visited hundreds of cities all over the world. The basketball forward has played in St. Louis a number of times and has nothing but love for the Gateway City. "I've been to every state, but I love coming to St. Louis every time," Shaw says. "The crowd is great here, and I can't wait to play here again."

But one thing Shaw hadn't done was visit the Gateway Arch properly.

"I'm excited because I took pictures outside of it, but I've never actually been in there," Shaw says. "It's another great historical landmark that I get a chance to visit, and I'm very excited to take some pictures up there and go through the whole experience."

That experience included cramming his 6'6" frame into a tiny elevator, exploring the Museum of Westward Expansion and looking through the gift shops. Of course, he couldn't leave without teaching fans a few tricks. One visitor from Alaska mentioned that she'd already seen Shaw play and was a huge fan.

SHAW NOW KNOWS AND LOVES THE GLOBETROTTERS EPISODES OF SCOOBY-DOO Having been around since the 1920s, the Harlem Globetrotters naturally became part of pop culture, with prominent players appearing on television shows like Gilligan's Island, What's My Line? and The Price Is Right. But it was a series of Scooby-Doo episodes in 1972 and 1973 that cemented the Globetrotters' fame for many kids.

"Now that I'm a Globetrotter, I've seen it. Growing up, I didn't. Everybody comes with the DVDs for us to sign, so I said 'I've got to check this out, I don't know what I'm signing!'" Shaw laughs. "But it's great. Everybody loves it, and it was a great series of episodes."

Those Scooby-Doo episodes often featured Fred "Curly" Neal, a bald ballhandler with a squeaky voice and a positive outlook. Neal's player number was retired in 2008 -- one of only six Globetrotters with the honor.

"He's a great guy! I get a chance to work with Curly, because he's still with the organization and does a lot of ambassador and goodwill work," Shaw says. "I tell you, I've been around a lot of athletes, and I have to say he's one of the most recognizable. Positive energy all the time; he just lights up the room. So I learned a lot about how to conduct myself as a Globetrotter and carry that same energy. He's one of the greatest to do it, you know?"

The Harlem Globetrotters play at Scottrade Center on January 2. Get ticket information here, and learn more about the Globetrotters on Facebook and Twitter.