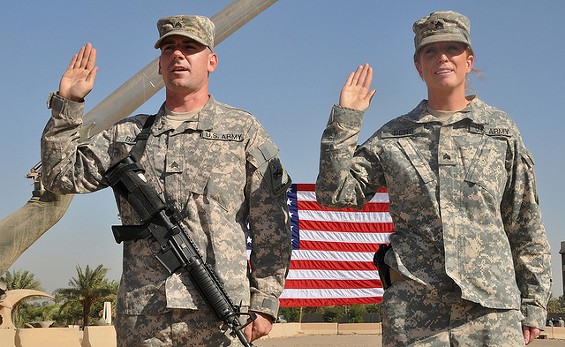 St. Louis' recent downtown revitalization and low housing costs are just two of the reasons why young veterans should consider moving here after service, according to a study.

The USAA, which provides insurance and financial services to 10.4 million current and former members of the U.S. military, and the U.S. Chamber of Commerce Foundation released a list of ten of the top cities where young vets can transition out of military life and into a civilian career. St. Louis ranks No. 5 this year, after not making the list at all in 2013.

The study -- designed by Syracuse University's Institute for Veterans and Military Families and data analysis firm Sperling's BestPlaces -- ranked 379 American cities according to several variables, including G.I. Bill enrollment, unemployment rate, military skills jobs, health resources and the presence of colleges and universities. The study excluded cities with unemployment rates more than 1 percent above the national average, violent crime in the top 2 percent and median living costs more than 10 percent above the national average.

The annual study is designed to help young veterans find new cities to put their training and experience to work in a civilian sphere -- which can be a challenge. Veterans can have different needs than the general population, such as specialized mental-health care and employers who can translate military service into non-military work. Most veterans report their transition into the civilian sphere is "difficult," according to a study from the Institute for Veterans and Military Families.

"Our mission is to help the more than 1.5 million service members expected to leave the military find meaningful employment," says Eric Eversole, vice president at the U.S. Chamber of Commerce and executive director of Hiring Our Heroes. "This list identifies the top places for veterans to use their discipline and determination to succeed in civilian workplaces."

Here's how the USAA pitches River City to vets shopping for their new homes: "Known as the 'Gateway City' because of access to transportation routes, St. Louis is an important center of commerce and culture. A recent downtown resurgence has brought new residential facilities and reclaimed warehouse lofts downtown anchored by new sports venues."

St. Louis has one of the highest unemployment rates of the top ten cities for vets: 7.2 percent in St. Louis compared to 6.8 percent in Pittsburgh, the No. 1 city for young veterans. But St. Louis also has low housing prices and two major employers of former servicemen and servicewomen: Caterpillar and Anheuser-Busch.