Hey Dogtown, This is Why Your Sewers Smell Awful (Hint: It's Not Poop) 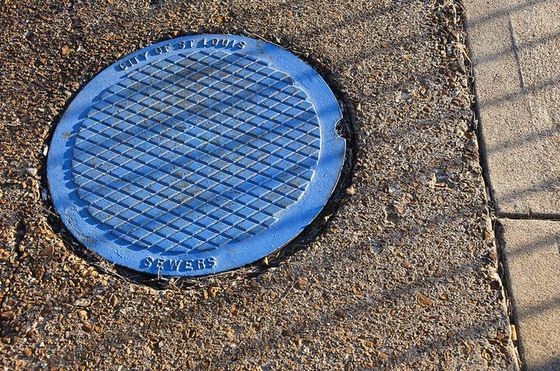 There's something stinky in Dogtown.

Residents of the quaint neighborhood south of Forest Park have been whiffing the mystery odor for several days, describing it as a sort of toxic, permanent-marker-type smell. Some have reported the stench in their homes.

It turns out the odor is coming from the sewer, although not for the usual poop-related reasons.

Here's the real smelly scoop: The Metropolitan St. Louis Sewer District, or MSD, is working to repair and upgrade parts of the sanitary sewer line infrastructure in the western part of Dogtown.

Here's a map of where the work is occurring, courtesy of Alderman Scott Ogilvie‎.

According to MSD spokesperson Lance LeComb, the stank-producing project involves installing what's known as a cured-in-place pipe. It's a process in which in an epoxy-infused liner is placed on the inside of a leaky pipe. Then, after the liner is in place, hot steam or hot water is used to cure the material, inflating the liner to become seamless new pipe that can extend the life of the sewer infrastructure.

The heating/curing process is known to release smells that, while gross and annoying, don't pose a health risk, says LeComb.

"Odors do come off sometimes, and we certainly apologize for the inconvenience. This is a very large sewer, so it'll have more of an odor impact than we usually see," says LeComb.

However, Lacomb adds, it is possible for the smell to emanate from inside a home, likely through dried-out sink traps or basement drains. If you start to smell something funky indoors, he suggests pouring two or three cups of water in the sink or down the drain to seal those smells away.

The epicenter of MSD's repair work (and also the smell) is currently located at McCausland Avenue and Nashville Avenue, says Lacomb. While the repairs were scheduled to finish December 18, this week's rain may push that date slightly further. In any case, MSD is using vented sewer lids and flushing the lines regularly in an attempt to dissipate the smell more quickly.

Lacomb advises residents afflicted with suddenly reeking homes to contact either MSD's Steve Welnick at 314-768-6378 or swelnick@stlmsd.com, or SAK Construction's Tim Bussen at 314-550-0353 or tbussen@sakcon.com.