Study: White Missourians Are Pretty Racist And Don't Even Know It 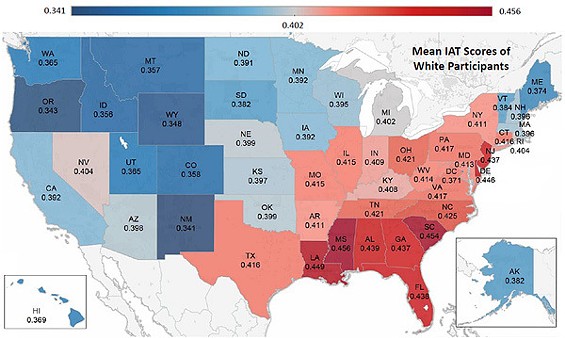 After months of reeling from turmoil after the fatal police shooting of unarmed Ferguson teen Michael Brown, St. Louis has had an u- close and personal look at implicit racism lately.

And we're not talking about overt, explicit racism -- the type that wears a klan hood, uses the n-word or photoshops pictures into viral memes about black crime. (Though there's plenty of that here, too.)

We're talking about uncontrolled or unrealized bias against people of color, like the Sullivan High School senior girls who were "very embarrassed and shocked" last month to learn that wearing blackface to look more threatening during powder-puff football came across as excruciatingly racist.

Implicit bias is an important, though little-discussed, factor in police shootings. In parts of St. Louis where mostly white police officers patrol mostly black neighborhoods, implicit biases "influence split-second law enforcement decisions" and "could have life or death consequences," according to the Washington Post.

To measure how implicitly racist whites in America really are, the group Project Implicit has given an implicit association test to more than 2 million people, asking them to rapidly sort white and black faces and to label a variety of words ("agony," "joy," "anger") as either "good" or "bad."

The faster you match negative words with black faces (or positive words with white faces), the more likely you are to harbor deep (and possibly unknown) bias against blacks, and the more implicitly racist you are. And Missouri is pretty darn implicitly racist. Only twelve U.S. states earned higher scores for implicit racism than Missouri, although test showed bias in every single state.

Here's how the test's scoring works: The scores range from 0 (not racist) to 1 (very racist), and a score of .35 is the cutoff between "moderately prefer white" and "strongly prefer white," Project Implicit analyst Kaiyuan Xu tells the Washington Post. Michigan, the state with the median score, earned a .402. Missouri and neighboring Illinois both earned a .415.

Project Implicit's test results hardly reflect a representative sample of Americans. Rather, test subjects opt in to taking an online test about racial bias, which may indicate that they're less biased than average.

"These volunteers are younger, more educated, more politically liberal and more female than the U.S. population as a whole," says University of Washington psychologist Anthony Greenwald, inventor of the Implicit Association Test, to the Washington Post.

But that doesn't change the fact that bias rears its ugly head in all 50 states -- or that Missouri's score is only .001 less than Texas'. Yikes.