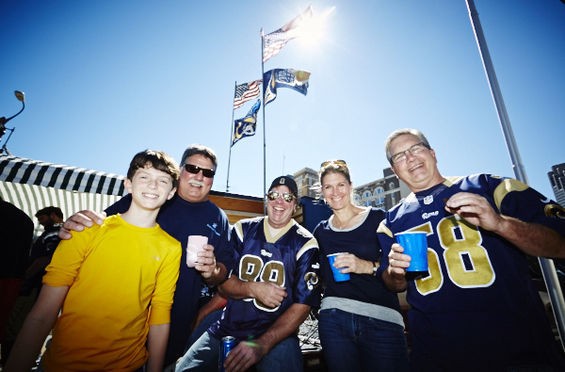 The chances of the St. Louis Rams or another NFL franchise moving to Los Angeles next season and ending that city's two-decade-long football drought are becoming increasingly unlikely, according to a new report from the New York Times.

St. Louis has been fighting to keep its NFL team in town even as rumors spread that owner and Walmart heir billionaire Stan Kroenke committed to moving to LA after buying a 60-acre plot there for a brand-new stadium.

The Rams move to a year-to-year lease on the Edward Jones Dome in 2015 after negotiations over stadium improvements stalled. But even though St. Louis' blue-and-gold could leave for Los Angeles, news coming out of the NFL seems to indicate they won't...yet.

UPDATE, Dec. 21: NFL Commissioner Roger Goodell has informed the St. Louis Rams that Los Angeles is off the table for 2015. The Rams still have until late January to decide a new lease. End of update.

Commissioner Roger Goodell tells the New York Times that the NFL is still looking for a stadium to host a Los Angeles team, but nothing is definite.

"I'm not at the point where I would tell you that anything is imminent or that we have a solution identified at this point in time," Goodell tells the Times. "There is progress, but we've all heard that before."

The Oakland Raiders and the San Diego Chargers also have the option to exit stadium leases next year, but builders aren't willing to start construction on an LA stadium until a team commits to making the move, the Times reports.

Los Angeles mayor Eric Garcetti says he's unwilling to subsidize the construction of a stadium, and the Rams aren't getting the funds they want to refurbish the Edward Jones Dome either. Last month, Governor Jay Nixon tapped former Anheuser-Busch chief executive Dave Peacock to lead the charge to keep the team local.

"Make no mistake about it -- St. Louis is an NFL city," Nixon said. "The economic impact of having an NFL team in St. Louis extends long beyond Sunday afternoon and sends a clear signal that this city is a worldwide player."

Peacock met with the NFL's point man on Los Angeles Eric Grubman late last month and showed him preliminary plans for new St. Louis stadium sites, including one near the Mississippi River north of the Gateway Arch, according to the Times.

An online petition to keep the Rams in St. Louis reached more than 3,000 signatures as rumors of an LA move spread.