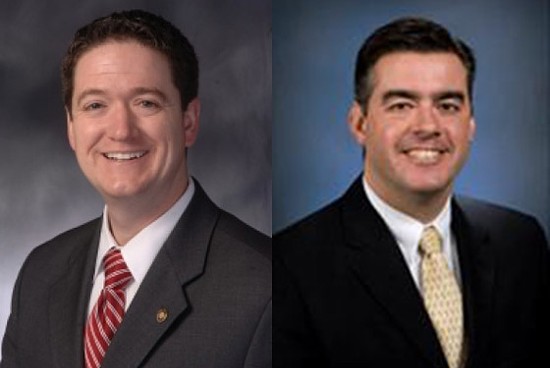 Missouri's Republican legislative leaders tried this month to stop the Show-Me State from recognizing same-sex marriages performed in other states, such as Illinois, which expanded the right to marry more than a year ago.

Senate President Pro Tem Tom Dempsey, a Republican from St. Charles, and House Speaker Tim Jones, a Republican from Eureka, filed a motion to intervene in the Jackson County case Barrier v. Vasterling so they could take the case to the Missouri Supreme Court. Judge Dale Youngs ruled in that case in October that Missouri must recognize out-of-state gay marriages, giving those couples access to tax, insurance, veterans' and other benefits despite the Missouri's ten-year-old, voter-approved ban on same-sex marriages.

The move to appeal the case drew criticism from fellow state legislators who wondered if Dempsey and Jones had their priorities in line.

"I know full well that the general assembly and our leaders have bigger issues deserving their attention," said Jolie Justus, a state senator and senate minority leader. "And as a lawyer, I cannot understand why they would allege that the legislature had any legal standing to intervene."

But Youngs, the judge in the case, quickly shut down Dempsey and Jones' objections to his ruling, saying the deadline for the legislators to intervene in the case had passed and that he no longer had jurisdiction, according to the Kansas City Star.

Kansas City officials said they would not fight against Youngs' ruling.

"The city's position is we're in support of gay marriage," city councilman Ed Ford told the Kansas City Star. "We believe both the city and state should give full faith and credit to gay marriages that take place outside of the state."

Attorney General Chris Koster, who has said he is personally in favor of gay marriage, also declined to appeal the ruling. State representative Mike Colona said Dempsey and Jones should accept the attorney general's decision instead of trying to play lawyers themselves.

"We should respect the decision of a co-equal branch of government," meaning the attorney general, Colona said. "We as a general assembly should not intervene in the legal process without first having debated the issue and authorizing such intervention."