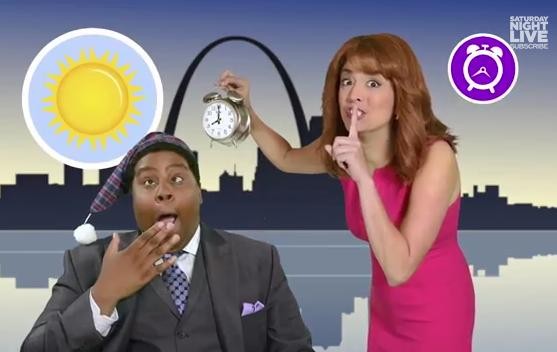 The last time Daily RFT wrote about KMOV (Channel 4) morning show hosts Andre Hepkins and Claire Kellett was in 2012 when their suggestive promo commercials hinted that the two had more than just an on-air chemistry.

Now Saturday Night Live has joined in the fun with a skit this past weekend that parodies KMOV's morning crew coverage of Ferguson. And while SNL cast members Cecily Strong and Keenan Thompson go by the names of "Jenny" and "Kip" in the skit, it seems pretty clear that they're modeled off the real-life KMOV team -- right down to Andre's three-piece suit and Claire's highlighted locks.

See also: Will KMOV's Morning Anchors Just Do It Already?

The SNL skit opens with a sullen news anchor turning over coverage to the morning Rise and Shine hosts, and from there everything takes a turn for the worse. There's Jenny mispronouncing the band the Black Keys as the "Blackies" and Kip noting that a local fun run is a "superior race."

James Franco appears as a chef in the skit who's there to promote his new cookbook and fix up a frittata with egg whites, which has Thompson's character admonishing him to "use the whole damn egg." Oh, and Franco's character is named "Darryl Wilson."

Sadly, the skit didn't air during Saturday's live TV show, but SNL later put it on YouTube. Here it is: