Last week, it was five members of the Rams' high-flying receiving corp who made a public show of support for the Ferguson protests by making the "Hands Up, Don't Shoot" gesture as they took the field.

But if their critics -- such as the St. Louis Police Officers Association -- assumed Rams players had gotten their fill of social commentating, they'd be wrong.

This past Sunday, Rams starting guard Davin Joseph made his own statement by writing the recently coined rallying cry against police brutality, "I can't breathe," on his cleats. The words serve as a tribute to Eric Garner, who was recorded saying "I can't breathe" repeatedly after being placed in a fatal choke-hold by a New York City police officer in July. Joseph Tweeted a photo of his cleats prior to the game against Washington.

Kenny Britt and Jared Cook, two players who'd already made headlines by raising their arms in solidarity, joined Joseph this week in paying tribute to Garner. Cook wrote "I can't breathe" on his wrist tape, while Britt covered his shoes with the names of Michael Brown, Trayvon Martin and others whose deaths sparked national anger.

"Every life in this world is worth something, and when you lose one, it hurts, no matter who it is," Joseph told the Associated Press. "We have to stand for the value of life."

It remains to be seen if Joseph and his teammates' tributes to Garner raise the same kind of ire as last week's "Hands Up, Don't Shoot" demonstrations, which led to backlash from Darren Wilson-supporting fans and a demand for apology by the St. Louis Police Officers Association. Ultimately, the incident resulted in a stunning display of mutual pettiness as the St. Louis County Police Department and Rams VP Kevin Demoff publicly bickered over the definition of "apology."

Some fans were so angry at the team that they've renounced their support completely, going as far as burning the team's jerseys at a sports bar in Imperial on Sunday. 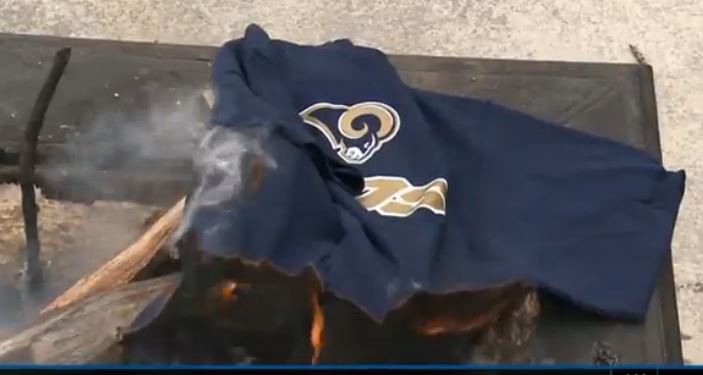 "Why would you do something like that? It's utterly ridiculous," one ex-fan told KSDK. "I think the Rams ought to pack their bags, and I'll give them a plane ticket back to LA."

Hatred for the Rams is also burning up the Internet. A "Boycott St. Louis Rams" Facebook page has collected nearly 26,000 likes since its launch last week.

It's not just Rams players, though, who used their high-profile position to send a message yesterday. Washington defensive lineman Chris Baker raised his arms in the "Hands Up, Don't Shoot" gesture after sacking Rams quarterback Shaun Hill, and later confirmed his intent to a reporter and on Twitter.

Baker had raised his arms in celebration earlier in the game, when he managed to (hilariously) distract himself and allow the Rams the recover a fumble. He later told the Washington Post that he was not doing the "Hands Up, Don't Shoot" gesture on that particular play.

Other NFL players made tributes to Eric Garner on Sunday as well, including the Detroit Lions' Reggie Bush and Cleveland Browns' Johnson Bademosi.

Browns' Johnson Bademosi with an "I can't breathe" message Sunday. Via @GettyImages pic.twitter.com/wLg8kvHNov