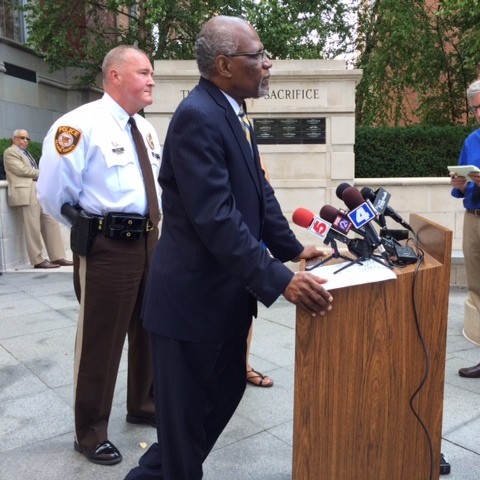 The post used the death of twelve-year-old Tamir Rice, who was gunned down by police in Ohio while holding a replica gun, to instruct parents on how to set rules for children when it comes to toy weapons. The now-deleted Facebook diatribe says parents should "know how officers are trained" and warns them that police will respond to a child's toy gun "as though it is a real gun" until they know otherwise.

"They need to no longer have the gun in their hands, throw it away from them" if approached by police, officer Aaron Dilks from the Fenton precinct writes in the post. "They need to comply with officers' instructions. They may be ordered to lie down on the ground."

The post, titled "Kids will be kids?," went live the morning after a New York grand jury's decision not to indict the officer who strangled Eric Garner to death and a week and a half after a Clayton grand jury voted not to indict then-Ferguson p olice officer Darren Wilson for fatally shooting unarmed teen Michael Brown. Both decisions sparked nationwide fury and protests over police use of force. 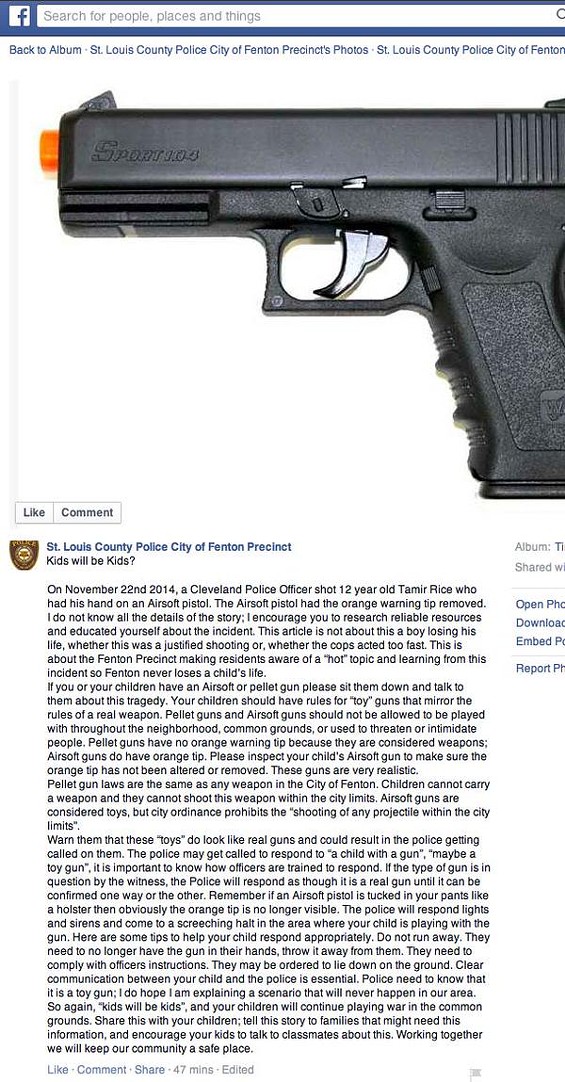 Even after it was deleted, the post's tone-deaf approach to police shootings made headlines across the country and in Europe.

"The post conveyed the message that my officers respond to calls involving a child with a gun with indiscretion and little regard for life," Chief Belmar said in a statement released after the Facebook post was taken down. "I want to emphasize that my officers respond to calls with discernment, and have the highest regard for human life. We train officers to take all facts and circumstances into consideration when making decisions about using force."

Tamir was shot dead by a police officer responding to a 911 call about a boy carrying a gun in a park. Tamir's $20 replica gun did not have an orange tip, which typically distinguishes fake guns from the real thing, and the officers were not told that the caller suspected that the gun was fake.

"Please inspect your child's Airsoft gun to make sure the orange tip has not been altered or removed," Dilks wrote in the Facebook post. "These guns are very realistic."

Dilks also addressed the 911 caller's assertion that Tamir kept his toy gun in the waistband of his pants.

"Remember, if an Airsoft gun is tucked in your pants like a holster then obviously the orange tip is no longer visible," the post said. "The police will respond lights and sirens and come to a screeching halt in the area where your child is playing with the gun."

On Thursday, December 4, 2014, an officer assigned to the St. Louis County City of Fenton Precinct made a post on the precinct Facebook site that spoke about the death of 12 year-old, Tamir Rice of Cleveland, Ohio. The intention of the post was to inform citizens about the potential danger of airsoft or pellet guns resembling real guns. However, the post was a misguided communication strategy and was offensive to many people.

As Chief of Police, I apologize to Tamir's family and anyone who was offended by the post. While the post did not originate from the Chief's Office and I was unaware of its presence prior to its release, I realize the message was insensitive to Tamir's family and the sorrow they are currently experiencing. The post conveyed the message that my officers respond to calls involving a child with a gun with indiscretion and little regard for life. I want to emphasize that my officers respond to calls with discernment, and have the highest regard for human life. We train officers to take all facts and circumstances into consideration when making decisions about using force.

The Facebook post has been removed and because of this incident, the social media policy has been altered in order to prevent future occurrences. I know social media is an effective way to provide the public with information, and I will make every effort to ensure that we do it in a responsible manner. Our continued thoughts and prayers go out to Tamir's family in this trying time.