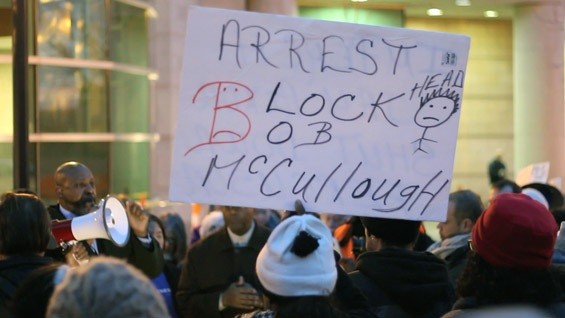 A Clayton demonstration organized to protest a grand-jury decision not to indict the police officer who choke-held Eric Garner to death in New York yesterday petered out after about an hour.

About 100 protesters gathered Wednesday evening at the foot of the steps to the St. Louis County Library in Clayton after news that the police officer who killed Garner would not be charged with a crime.

The Garner case had special significance in St. Louis, which has experienced near-nightly protests all over the city after the fatal shooting of Michael Brown in Ferguson. Last week, a grand-jury decision not to indict the then-Ferguson police officer who shot Brown was followed by a violent night of gun shots, looting, arson, tear gas and vandalism.

Protesters retorted with "Hands up, don't shoot," and "No justice, no peace," to which the woman replied, "I have all the peace I need! Too bad, so sad."

She started to follow the mob as they continued on North Central, but stopped when she realized the group of nearby police officers wasn't following her.

Protesters continued past the St. Louis County Police Headquarters, which was surrounded in barricades, on the way to Carondelet Avenue in front of the Buzz Westfall Justice Center. There, clergy and protesters took turns speaking into a megaphone.

"I'm leaving to go downtown," one female protester said to her friends as she walked away. "I mean, the streets are already shut down here."

Enthusiasm continued to wane as protesters marched down Carondelet Avenue but were turned around at South Hanley Road by members of the Gamaliel Network, clergy and congregation members from all over the country who appeared to be leading the march.

"We're not making a point here," said nineteen-year-old Josh Williams who has been a frequent protester throughout the city since August. "We're not shutting anything down, what's the point?"

"I'm mad I came all the way to Clayton and didn't shut anything down," said another woman as she walked away.

By 5:30 p.m., the group of about one hundred had dwindled to fifteen or twenty people milling in the Bemiston and Carondelet intersection. Captain Stewart Glenn of the Clayton Police Department, who had been watching the protest, chatted with some of the remaining protesters as they moseyed to the sidewalk.

"Very peaceful, everything went very well," he said, adding that the police expected the protesters to show up, and they put up barricades to prepare.