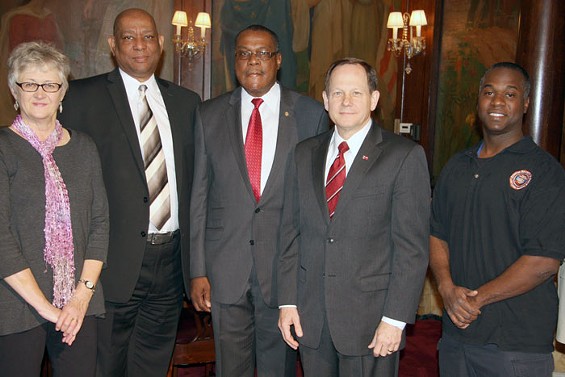 St. Louis will hire 160 new police officers over the next two years with a special focus on recruiting from the black community, says Mayor Francis Slay.

Citing "the Ferguson effect" and two recent violent crimes -- a Bosnian man killed by hammer-wielding teens in Bevo Mill and a shooting at a south-city bar that injured six -- Slay says St. Louis' increasing crime rate means its time to add more officers to the force. Since August, the city has seen a 6 percent increase in crimes against persons, and there have already been eighteen more homicides this year than there were in 2013.

"This is something that is very disturbing to me," Slay tells Daily RFT. "These are very senseless crimes. The fact is that we need to make sure the cops have the resources and the manpower necessary to deal with this."

Slay says it's no coincidence that the uptick in crimes against persons started in August, when unrest started over the fatal shooting of Michael Brown in Ferguson.

"There is a higher level of tension. I think criminals become more emboldened," Slay says. "That is a bad trend and one we need to deal with."

The city is partnering with the Ethical Society of Police, which represents African American police officers in St. Louis, to gather a diverse pool of police academy applicants. Funded with $50,000 in Proposition S money slated for public safety, St. Louis police officers from the Ethical Society will identify potential candidates, mentor them through a ten-week course on report writing, interviewing, fitness and policing strategies, and help them apply for academy.

"We want to make sure we have a police department that reflects the diversity of our city," Slay says. "It builds a higher level of trust between the police department and the community. The cops can do their jobs a lot better."

Minorities make up 34 percent of the St. Louis police department and 44 percent of the city's adult population, Slay says. The last two classes of police recruits have been half African American.

The challenge will be finding the money to pay for 160 new officers, especially since the city has already spent $2.5 million on security to address unrest due to the fatal shootings of Brown, Kajieme Powell and Vonderrit Myers. Here's what Slay tweeted about funding new officers:

I asked my staff to make some recommendations on how we can add the officers over a two year period. #fgs

Hard decisions mostly likely will have to be made. #fgs

Slay says he's hoping for state or federal funds, but he isn't ruling out a tax increase or cuts to the city budget.

"Everything is on the table," Slay says.