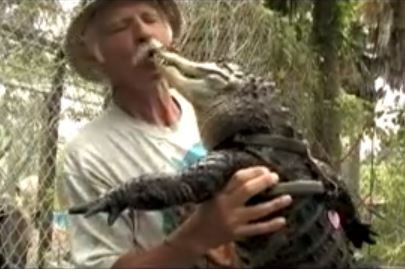 A Florida wildlife organization tied to a traveling "gator educator" is demanding the city of Columbia to pay up for injuring their alligator, a twenty-year-old, 100-pound, six-and-a-half-foot-long female gator named Babe.

Babe was one of seven alligators (along with a Burmese python, various turtles and a few dogs and cats) seized from Ken Henderson's van in June 2011 while he was parked in the Boone County Fairgrounds. He was charged at the time with nineteen misdemeanors, of which all but seven were dropped this past April, according to the Columbia Tribune.

But tragedy struck while the animals were being held for two months in 2011: Angel, a seven-year-old alligator, was allegedly placed in the same pen as Babe and the other five gators, which Henderson had explicitly warned animal control officers not to do. The other gators attacked and killed Angel. Babe also damaged her mouth and teeth.

All the animals were owned by the Global Environmental Scientific Zoological Educational Institute & Foundation, a nonprofit "zoological education foundation" based in Boca Raton, Florida, according to a letter mailed to the mayor of the city of Columbia dated December 3.

The organization is demanding a $250,000 settlement in lieu of the total damage to its alligators, which its St. Louis lawyer Albert Watkins claims amounts to $1.4 million.

Watkins calls Henderson "one of the world's premier alligator experts."

"You can't replicate the training and the educational process that was required to get these alligators to be able to act in the behavior they did," Watkins says. "And they not only failed to observe my client's recommendation, but their failure resulted in the death of one of these beautiful creatures."

According to the letter, since being returned to the organization in July 2011, Babe has had needed extensive retraining so that she can again interact with the public, at a cost more than $200,000. Then there's the $35,000 surgery so Babe can close her mouth properly, $60,000 worth of dental work to repair her teeth and $43,800 for a special boarding facility where Babe can be worked on by veterinary specialists.

Watkins says that Henderson, who lives in Warren County with his gators and other animals, is now largely retired from his career as a traveling educator.

But you can still watch the extent to which Henderson cares for these scaly beasts, even to the point taking a gator into his arms laying on some smooches:

Animals See You in Court!