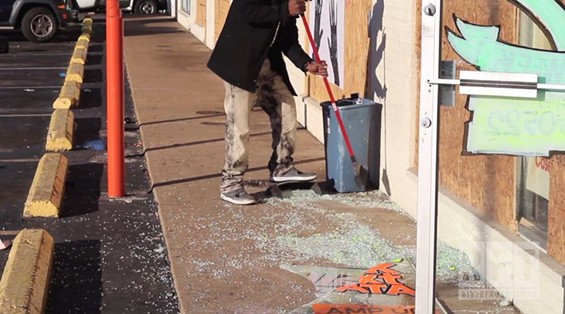 When rioters broke into Sonny Dayan's store on West Florissant Avenue the night the grand jury released its decision on the Darren Wilson investigation, police officers, Missouri State Highway Patrol troopers and the National Guard were nearby.

But no one came to stop the looting.

"They didn't feel they had enough reinforcements for the volume of demonstrators that are looting," Dayan says police told him. "So they backed off, and the rest is history."

Riverfront Times videographer Sadiyyah Rice talked to Dayan as he cleaned his store. He says the damage is costing him thousands of dollars, and each day he stays closed is another $2,000 lost.

"We have lost 40 percent of our business in the last three months. Folks are not coming to the neighborhood," he said.

Dayan says he wishes Governor Jay Nixon -- or whoever was supposed to be in charge that violent night -- would have stationed officers or guardsmen along his street to prevent the looting that seemed inevitable.

"They were nowhere to be found," says Dayan about law enforcement. "I just feel like it was a missed opportunity to save a lot of our livelihood. I feel like it could have been handled better, but it is what it is."