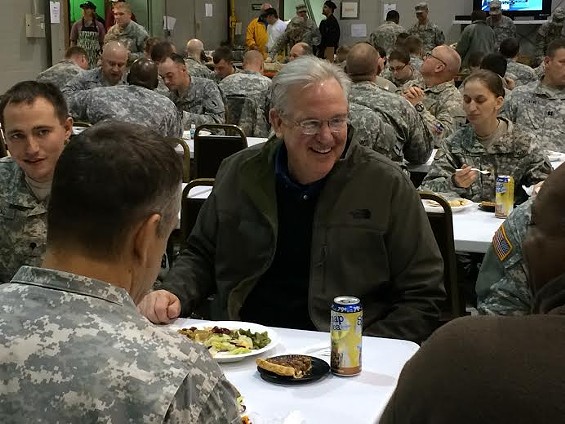 Nixon even called for a special session, imploring lawmakers in a letter to take "swift action" or else risk not being able to pay troopers and soldiers on their December 15 payday.

"Time is of the essence," he said in a statement. "It is vital that we act quickly so that we can fulfill our obligation to the men and women who are so bravely and capably serving their fellow citizens."

Turns out, the money is already in the budget. It has been all along.

Soon after Nixon's call for a special session, Kurt Schaefer, the senate appropriations chairman, wrote to the governor that there's still $12.5 million in the budget that can be used for emergency costs.

"After researching this issue and discussing it with appropriations staff, I can find no apparent reason why the governor cannot use this appropriation for either the guard or patrol given that he has declared a state of emergency in responding to Ferguson," Schaefer said.

By Monday, Nixon had nixed his special session, calling Schaefer's take on the budget an "alternative interpretation of appropriation authority" that makes the emergency budget meeting "unnecessary."

Or, as state Representative Jeremy Lafavre of Kansas City puts it:

The money will come from funds typically appropriated for matches to federal funding, which Shaefer quickly found could be used by the governor in an emergency. Tim Jones, Missouri's speaker of the house, called Nixon's bizarre about-face an "ultimate leadership #fail."

After #moleg taught him how to read his budget: @J_Hancock: Special #moleg session 2 deal with funding 4 #Ferguson cancelled by @GovJayNixon

PoliticMo writes that Nixon's whiplash-giving decision comes after pressure built to get Nixon to testify about the state's response to Ferguson protests, especially after businesses burned down on the night when county prosecutor Bob McCulloch announced that then-Ferguson police officer Darren Wilson won't face charges for fatally shooting Michael Brown. Jones tweets that even without a special session, he's still looking for answers about why there was so much damage to Ferguson and Dellwood after Nixon declared a state of emergency and called in the National Guard days before the grand-jury decision.