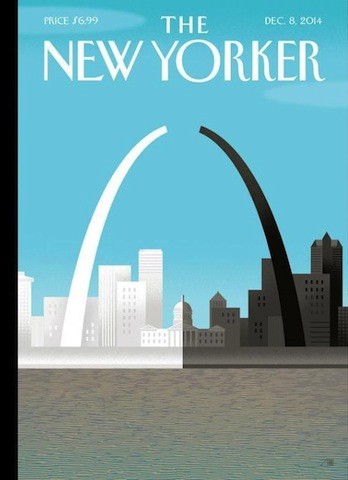 It's half-white, half-black, and it's got people talking.

Bob Staake, the designer of the December 8 The New Yorker cover featuring a divided St. Louis skyline, says his image was meant to do just that.

"It's interesting to me to see the diversity of opinions of a piece of art," Staake tells Daily RFT. "Some see it as hopeful, some people see it as just wrong, and some say, 'Yeah, that's the way it is.' It's broad enough that it begs each individual to take it in and come up with their own interpretation."

Staake, 57, lived in St. Louis for seventeen years. He moved to Kirkwood from Los Angeles in 1986 and recalls encountering more than a few racists during that time, which, along with recent national media coverage, colored his inspiration for the design.

"It's one thing to visit a city, but it's another thing to live there for seventeen years," he says. "You really get to know it in much greater depth by living there. I was amazed by the racist things that I would hear when I moved there, unapologetically racist."

A Kirkwood neighbor, for example, frequently dropped the N-bomb while exclaiming his disdain for an African American family that moved in down the street from them in 1991. Staake was stunned.

Another incident that sticks out in Staake's mind is a "racist diatribe" from a coworker in his office in Webster Groves. Afterward, the man admitted that he was "pretty racist."

"It was almost as if people didn't have a filter," Staake says. "But maybe other cities are the same way -- I just didn't live in those cities. This is not an indictment of St. Louis in any way. I think it's a wonderful city." Beside the racism, of course, as his design indicates. He says the gap at the top of the Arch is meant to imply a need for blacks and whites to come together.

While 2010 Census data (and Staake's cover image) show a stark black-and-white divide of the area as a whole, many Ferguson residents say that's not the reality for their town.

"I'm just tired of the mainstream media coming down here and making us look like a bunch of hooligans and rednecks and idiots," says Byron Conley, who has lived in the neighborhood across from the Ferguson Police Department for 24 years.

Conley, 51, who is black, says he never noticed any racial divide among Ferguson residents until recently.

Craig Kidd, 35, moved to Ferguson from Texas in 2003. He and his wife, Angelique, who are both white, were looking for a town with racial diversity. They wanted to get away from the racial tensions in the South and settled on Ferguson. The town was about half black and half white at the time.

"There were news channels that would show riot footage each night, and it wasn't even happening anymore," he says. "They would play it for three days, and then you would go down there and there was nothing happening."

He tells Daily RFT about a conversation he had with a CNN reporter on West Florissant Avenue in late August.

When Brown was shot and reports news reports started criticizing deep-seated racial tension in Ferguson, Kidd says he was surprised.

"I started asking my black friends and neighbors, 'What do y'all think about this?'" he says. Most responded that they haven't noticed any racial tensions among their neighbors, and that blacks and whites get along fine in Ferguson, Kidd says.

Deanel Trout, who lives near Kidd, has mixed feelings on the matter. The 54-year-old has lived in St. Louis for most of his life. Trout, who is black, moved to Ferguson fourteen years ago from University City, where he and his family integrated the area in 1968.

"The racism here is embedded so deep," Trout says of St. Louis as a whole. "This is the most segregated city I've lived in in my life, and it's been like that forever."

But Ferguson is a little different, he says, telling of the racial diversity of his neighborhood and friendships with white neighbors.

"Robert Superior is a great subdivision," he says of his neighborhood that's about two miles from Canfield Green Apartments. "We get shit done here, and we don't accept no bullshit. This incident here has caused so much division and animosity, and it's turned into a damn race war. It ain't even about Michael Brown; it's about black against white. It's sad."

Like many long-time Ferguson residents, Trout is hopeful the situation will bring about change.

"It's better even now," he says. "When the meetings first started it was total chaos, but it's a lot better. At least people are talking. You got people shaking hands, giving hugs and exchanging numbers."