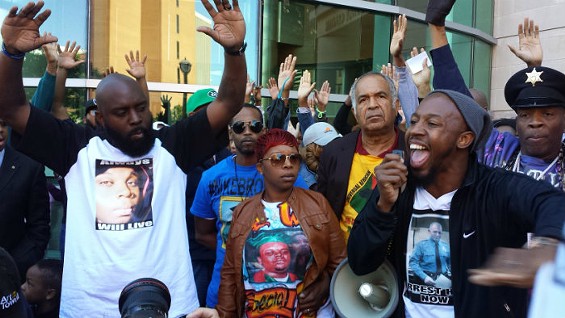 Five players for the St. Louis Rams took the field at the Edward Jones Dome Sunday with their arms raised in a symbol of solidarity with Ferguson, where an unarmed black teen was fatally shot by police in August.

Some Rams players took the field in a "Hands Up, Don't Shoot" pose: http://t.co/pZNWp9YG4B pic.twitter.com/06cWGCXCvE

Wide receiver Kenny Britt told FOX 2 (KTVI) that he, Tavon Austin, Stedman Bailey, Chris Givens and Jared Cook gave the "hands up, don't shoot" gesture to show support for Ferguson, not to choose sides in the national debate over racism and police brutality ignited after the shooting death of Michael Brown.

"Everything about the situation touched me because it could have happened to any of us,'' tight end Cook told the AP. ''Any of us are not far from the age of Michael Brown, and it happened in our community. I wouldn't want to be in any one of those guys' situations that it happened to.'' Coach Jeff Fisher told media he was unaware of the planned pregame action.

The gesture of surrender and the "Hands Up, Don't Shoot" rallying cry gained popularity in the protests following Brown's death after witnesses said Ferguson Police officer Darren Wilson shoot while Brown's hands were raised. But there's little certainty about the actual location of Brown's arms or the meaning of the gesture before his death. After the grand jury decided not to file charges against Wilson, testimony transcripts released to the media show that witnesses disagree over Brown's final moments.

The St. Louis Police Officers Association condemned the action and said it would ask the NFL and the team for an apology.

"I'd remind the NFL and their players that it is not the violent thugs burning down buildings that buy their advertisers' products. It's cops and the good people of St. Louis and other NFL towns that do," said Jeff Roorda, the association's business manager. "Somebody needs to throw a flag on this play. If it's not the NFL and the Rams, then it'll be cops and their supporters."

Update, 11 a.m.: The NFL says the Rams players who made the "Hands Up, Don't Shoot" gesture will not be punished.

Brian McCarthy, the NFL's VP of communications, released a statement Monday: "We respect and understand the concerns of all individuals who have expressed views on this tragic situation." End of update.

The St. Louis Police Officers Association is profoundly disappointed with the members of the St. Louis Rams football team who chose to ignore the mountains of evidence released from the St. Louis County Grand Jury this week and engage in a display that police officers around the nation found tasteless, offensive and inflammatory.

Five members of the Rams entered the field today exhibiting the "hands-up-don't-shoot" pose that has been adopted by protestors who accused Ferguson Police Officer Darren Wilson of murdering Michael Brown. The gesture has become synonymous with assertions that Michael Brown was innocent of any wrongdoing and attempting to surrender peacefully when Wilson, according to some now-discredited witnesses, gunned him down in cold blood.

SLPOA Business Manager Jeff Roorda said, "Now that the evidence is in and officer Wilson's account has been verified by physical and ballistic evidence as well as eye-witness testimony, which led the grand jury to conclude that no probable cause existed that Wilson engaged in any wrongdoing, it is unthinkable that hometown athletes would so publicly perpetuate a narrative that has been disproven over-and-over again."

Roorda was incensed that the Rams and the NFL would tolerate such behavior and called it remarkably hypocritical. "All week long, the Rams and the NFL were on the phone with the St. Louis Police Department asking for assurances that the players and the fans would be kept safe from the violent protesters who had rioted, looted, and burned buildings in Ferguson. Our officers have been working 12 hour shifts for over a week, they had days off including Thanksgiving cancelled so that they could defend this community from those on the streets that perpetuate this myth that Michael Brown was executed by a brother police officer and then, as the players and their fans sit safely in their dome under the watchful protection of hundreds of St. Louis's finest, they take to the turf to call a now-exonerated officer a murderer, that is way out-of-bounds, to put it in football parlance," Roorda said.

The SLPOA is calling for the players involved to be disciplined and for the Rams and the NFL to deliver a very public apology. Roorda said he planned to speak to the NFL and the Rams to voice his organization's displeasure tomorrow. He also plans to reach out to other police organizations in St. Louis and around the country to enlist their input on what the appropriate response from law enforcement should be. Roorda warned, "I know that there are those that will say that these players are simply exercising their First Amendment rights. Well I've got news for people who think that way, cops have first amendment rights too, and we plan to exercise ours. I'd remind the NFL and their players that it is not the violent thugs burning down buildings that buy their advertiser's products. It's cops and the good people of St. Louis and other NFL towns that do. Somebody needs to throw a flag on this play. If it's not the NFL and the Rams, then it'll be cops and their supporters."

You could say the "Hands Up, Don't Shoot" pregame stunt was a good-luck charm for the Rams, who stomped the Oakland Raiders 52-0 in the second-largest margin of victory in the franchise's history.