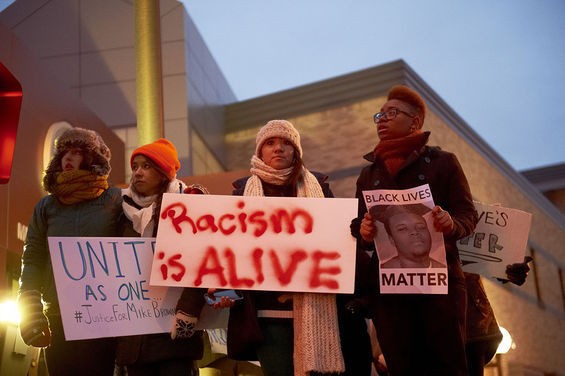 The shooting death of Michael Brown on August 9 immediately inspired a wide range of emotions and reactions nationwide, and the grand jury's decision on November 24 not to bring charges against Ferguson police officer Darren Wilson has reignited those feelings.

This week, citizens around the country (and elsewhere) vocalized their concerns about what they believe is a corrupt judicial system by marching through their own city streets. From Los Angeles to New York, Miami to Seattle, demonstrators showed their support for Brown's family and for Ferguson. The movement is similar to national protests and vigils that occurred in August. Below, we've collected just a few of the photos taken in cities nationwide, including those snapped by our Voice Media sister newspapers.

Things also generally were problem-free in Minneapolis, where City Pages says quite a few protests and rallies happened.

Edit: We're adding a link to this video from the Minneapolis StarTribune, in which a car plowed through a protest line and ran over a woman. Warning: It's jarring to watch.

In New York, thousands marched through a number of neighborhoods in differing degrees of calm or agitation, Village Voice reports. The city is waiting for its own grand jury to announce a decision in the case of Eric Garner, who was choked to death by NYPD officer Daniel Pantaleo.

There was plenty of chatter on Twitter about the nationwide protests, with many people taking photos while they participated.

Bowie State Students Are Remaining In The Street For 4 1/2 Hours. The Same Amount Of Time As Mike Browns Body✊ pic.twitter.com/MZK7Tpz5fA

LOUISVILLE SHOWED UP WERE OUT HERE! #ferguson pic.twitter.com/w0LeStHA60