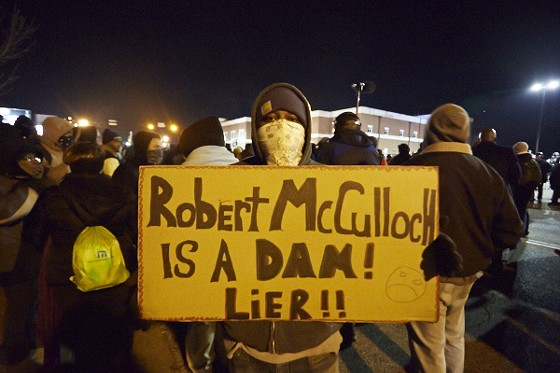 It's been two days since St. Louis County Prosecuting Attorney Bob McCulloch delivered his rambling, shade-filled announcement of the non-indictment of Ferguson officer Darren Wilson, and the ensuing confusion, doubt and anger -- and occasional violence -- continues to rock the St. Louis region.

But while analysis of McCulloch's announcement initially focused on the curious timing of the press conference, journalists and other experts have been tearing through the hundreds of pages of witness testimony from the grand-jury investigation. The picture that has emerged, so far, is conflicted: Though abnormal, experts say McCulloch's handling the grand jury doesn't appear illegal. On the other hand, McCulloch has been accused of being a self-serving tactician who schemed to both overwhelm the grand jury and protect himself from the inevitable backlash to the non-indictment.

All of this got us thinking: If there was enough popular discontent with McCulloch, could he be recalled from office?

In short the answer is, "Yes." But according to Ken Warren, a professor of political science and public policy at Saint Louis University, practical and political challenges would make it very difficult to pull off.

"It's a possibility, legally, but recalls infrequently work," says Warren. "Normally, you kick people out of office for not performing your duties properly, but as long as the person didn't act corruptly, using recalls is extraordinary in our system."

So, what would it actually take to recall an official like McCulloch? According to the to St. Louis County Charter's Title IX, you'd first need to submit a petition with enough signatures to equal 20 percent of the total votes cast from St. Louis County during the last governor election. After that, the referendum question -- "Do you want to recall Bob McCulloch?" -- would be submitted to the St. Louis County voters during the next primary or general election. (If such an election wouldn't occur for more than 90 days after the petition is filed, then a special election would be held.)

Finally, a simple majority vote on that recall referendum would be enough to boot McCulloch from office.

So let's run those numbers: St. Louis County accounted for about 520,000 votes during the 2012 governor's race. And 20 percent of that equals 104,000 signatures needed to put the recall referendum on the ballot.

But getting those signatures -- let alone winning a recall election -- poses a huge challenge in St. Louis County, whose million or so residents are 70 percent white. That demographic community is statistically more likely to support law enforcement and a "tough on crime" prosecutor like McCulloch, says Warren. There's also the matter of organizing and funding the theoretical recall campaign.

"Those people who support booting McCulloch out of office would have to try to prove to the public, literally through advertisements that they would have sponsor," he says.

It's worth mentioning that Warren has a personal connection to McCulloch: He ran McCulloch's first campaign for St. Louis County prosecuting attorney back in 1990, and returned to assist in the 1994 election as well. Though Warren calls McCulloch's timing of Monday's press conference "terrible," he doesn't believe that a recall election is warranted.

"Just because you disagree with McCulloch over how he handled the Brown grand jury is not a reason for recall," he says. "My position is that recalls are not justified in most cases because this is what elections are for. Recalls should be reserved for the most blatant abuses of power by politicians which are normally even illegal or blatantly unethical."