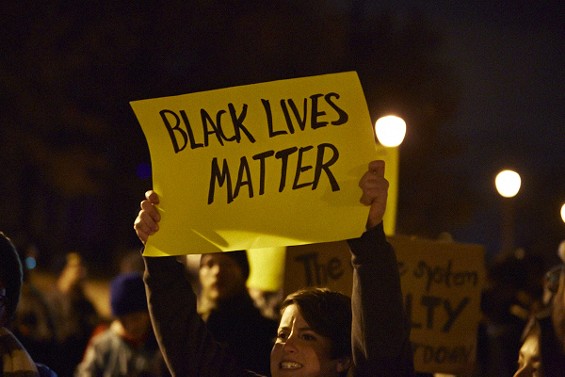 Riverfront Times videographer Sadiyya Rice was filming police as they used riot shields to protect themselves from thrown rocks when nearby protesters walked up, demanding to be heard.

Like the other hundreds of protesters who filled West Florissant Avenue Monday night, they were angry. A grand jury had just cleared Darren Wilson, a white Ferguson police officer, of any charges after he fatally shot unarmed black teen Michael Brown in a move many demonstrators took to mean that the justice system doesn't value black lives.

"It doesn't matter what we do," says the demonstrator who identified herself as Ann Kay. "They don't really care about us, and it's sad. This racism shit, it's going for the rest of our life, I guess. Because whatever they do, they're going to lock us down and lock us up."

"My reaction is that people are angry and disgusted. They don't know what to do, they don't know how to feel except to feel anger and disappointed."

RFT talked to dozens of people in Ferguson Monday night who said the grand jury's decision left them with anger and disappointment.