Tear Gas, Shootings, Arson and Looting in Ferguson After No True Bill Announcement 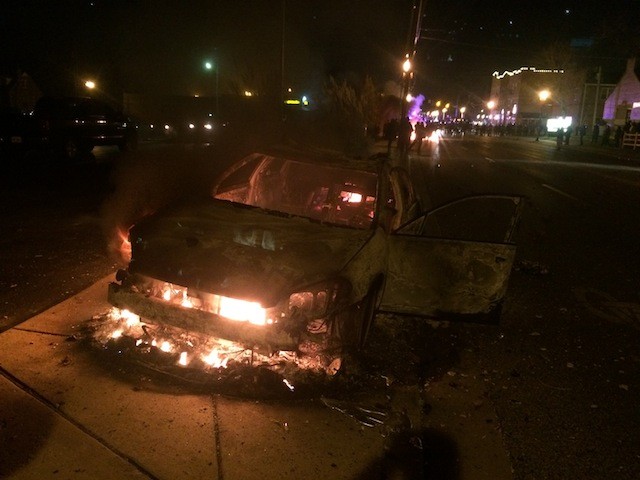 Another night of violence, looting and property damage plagued Ferguson last night with the grand jury's announcement that Darren Wilson would not be charged with the killing of Michael Brown.

Although the reaction on South Florissant Road in front of the Ferguson Police Department seemed peaceful at first, the violence many were expecting ultimately prevailed.

"We already knew what was going to happen," said Byron Conley, 51, of the grand jury's decision. The 24-year Ferguson resident, who lives in the neighborhood overlooking the police department, added that he hoped the protests wouldn't turn violent.

His wish was not granted.

Over on Canfield Drive, where Wilson and Brown had their fateful encounter and Brown lay dead in the street for four and a half hours, a small crowd of young men gathered to hear the verdict. As 8 p.m. approached, a man who paced back and forth around the memorial shouted a countdown. "Three minutes, White America. Two minutes."

A hush fell over the street when Prosecutor Bob McCulloch began his address of media in Clayton. Many listened on car radios. As soon as the "no true bill" or no indictment decision was clear, nearly the entire crowd on Canfield dispersed, rushing to cars and peeling out of the neighborhood toward West Florissant Avenue. Canfield Green residents who had been standing on their front steps slammed their doors.

"They let that nigga off!" someone shouted.

Over in front of the police department, a crowd of hundreds that had gathered hours earlier listened to the mother of Brown, Lesley McSpadden, as she wept. Her husband, Louis Head, embraced her and then turned to the crowd with a message very different from the one of peace and nonviolence the family had been stressing for three months now. The New York Times captured the moment on video: 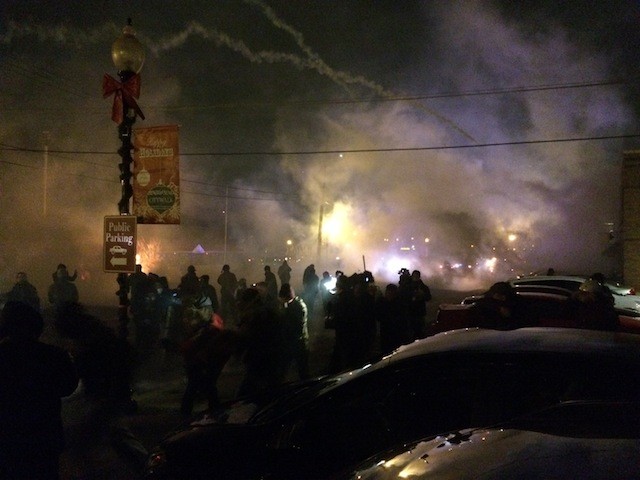 Within minutes of the announcement, protesters hurled bricks at officers and police cars further down South Florissant Road. Others launched patio furniture through storefront windows. Daily RFT heard a volley of loud gunshots just south of the police station, then popping sounds seemed to be erupting from all around, possibly on streets just off of South Florissant. With each succession of shots, the crowd would turn and flee in a panic, then return warily after several minutes.

One cameraman took a brick to the face:

"Nobody's surprised," said Gabrielle Hanson, nineteen, of the decision. "We all knew there was going to be no indictment when they put us under a state of emergency and brought the National Guard in two weeks early."

First a small trash can was set on fire. Then a dumpster behind a business was lit ablaze. When one of the police cars caught fire, a protester standing nearby, who declined to give Daily RFT his name said, "Good, fuck the police," when asked what he was feeling as he watched flames and black smoke engulf the car. He then unzipped his jacket to reveal a T-shirt that read the same. "They should have burned the I Love Ferguson store," he added, motioning to the store across from the car.

"It's bullshit," Fred Merritt said in response to hearing the grand jury's decision. "It's no justice out here. It's never going to be any justice."

Police continued to fire tear gas and other nonlethal crowd control projectiles as they told protesters to stand on the sidewalks or be arrested.

The Aftermath: Looters Break Windows and Set Fire to Walgreens in Ferguson from Voice Media Group on Vimeo.

Post-Dispatch reporter Paul Hampel captured startling videos of much of the destruction, including the moment after a young man was shot in the leg in his car:

At least a dozen vehicles ablaze at Auto Buy Credit in Dellwood https://t.co/Qn8OQGZY1b

All but two of the people arrested from were from St. Louis region.