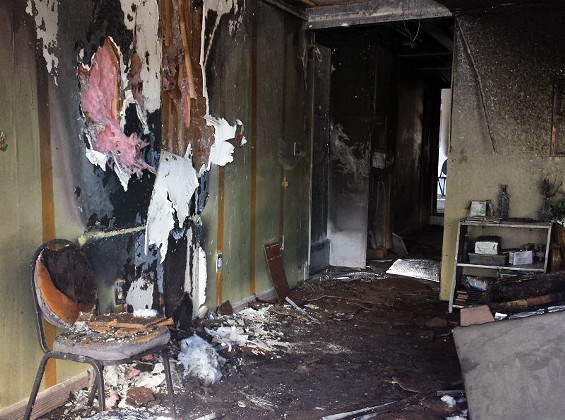 The church attended by Michael Brown Jr.'s father was lit ablaze by arsonists at some point last night or possibly early this morning. Michael Sr. and his wife Cal were just there this past Sunday before the family was collectively baptized at another church just a few minutes down the road in Jennings.

At least a dozen Ferguson business were consumed in fires in the aftermath of the no-indictment announcement from the grand jury. However, the Flood Church fire is an outlier as it is located a mile away from the most destroyed parts of West Florissant, and the surrounding businesses were not damaged in any way.

"You go down this street, you see nothing else touched," said Pastor Carlton Lee after a press conference with the Brown family at Greater St. Mark Missionary Baptist Church. He said he strongly believes his church was targeted.

Lee told KMOV (Channel 4)'s Brittany Nobel-Jones on November 21 that he has received 71 threats against him and his church, with specific threats to burn it down. Since Michael Jr. was shot and killed in August, Lee has been an extremely vocal advocate for the family and repeatedly called for the arrest and indictment of Officer Darren Wilson. In the interview, he said that the FBI told him they're not surprised he's been targeted:

Lee said he when he checked on his building late last night, everything appeared to be fine. He left to respond to protests and property damage on other parts of the West Florissant, including a car-lot fire, when he said he received a call on his phone telling him the church was on fire.

Lee said that the blaze was put out by one of the fire departments, though he was unsure which city specifically.

"There's significant structural damage," he said. "We don't know how bad it is yet."

When Daily RFT asked if Lee thought he had been targeted, he responded that he knew was.

Here is the message Lee posted on his Facebook page:

We'll continue to update this story as we learn more.