They gathered in the designated "safe space" -- MoKaBe's, a Tower Grove South coffeehouse that's usually filled with the din of clinking cups and chatting patrons. But when 8 p.m. rolled around last night, an eerie silence descended. For thirteen minutes around 80 people sat captivated by the voice of St. Louis County Prosecuting Attorney Bob McCulloch, piped in through the shop's sound system.

"The duty of the grand jury is to separate fact from fiction," droned McCulloch. "They accepted and completed this monumental responsibility...they determined that no probable cause exists to file any charge against officer Wilson and returned a no true bill on each of the five indictments."

A few sniffles could be heard. Heads bowed. Hugs, once accepted, lingered as McCulloch began to summarize the evidence -- the "accurate and tragic story of what happened" to Michael Brown, a black eighteen-year-old whose death on August 9 spurred months of protests demanding the arrest of Darren Wilson, the white Ferguson police officer who shot and killed the unarmed teen.

"This is nothing new," interjected Lisa Cagle, an activist and graduate student at Washington University, her voice rising above McCulloch's. "We've already heard all this shit. There is nothing new, nothing surprising. We knew this was probably going to happen. So here's what we're going to do. A lot of you are angry, a lot of you are sad.... So we're going to have four-and-a-half minutes of silence. Because after this moment, we're not silent anymore."

Someone turned off the audio feed to McCulloch's press conference. Four-and-a-half minutes later -- a number made significant by the four-and-a-half hours Brown's body lay on the street following his death -- the crowd streamed onto South Grand Boulevard and marched north. 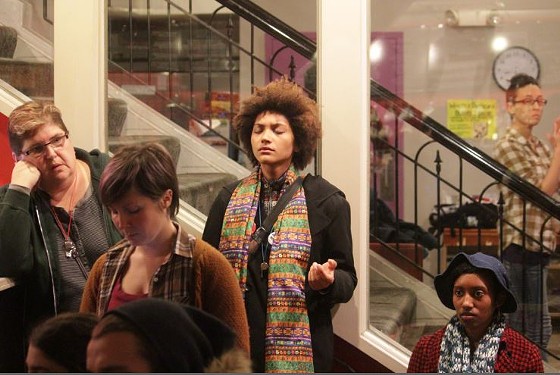 Some thirteen miles north, in Ferguson, the situation was already unraveling as hundreds of protesters gathered at the Ferguson Police Department. But here on South Grand, several hundred marched peacefully, not far from the Shaw neighborhood where another black teenager, Vonderrit Myers Jr., was shot and killed by a white police officer on October 8, sparking further protests.

Protesters carried signs and large banners -- "BLACK LIVES MATTER," "WHERE DO YOU STAND?" -- as the group approached Russell Boulevard. A handful of police cruisers idled down the road, blocking side streets. When the protesters approached, the cruisers cleared out.

"If you notice, there's no cops, except to keep the traffic away," said Alderman Steven Conway, whose 8th Ward contains the Shaw neighborhood. Around him, protesters chanted, "You can't stop the revolution!"

"We've embarked upon a policy of de-escalation," Conway continued. "We want people to be able to protest and have their voice heard." 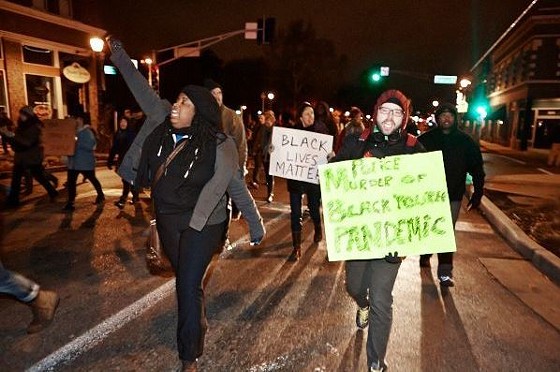 But the voices were different last night. Two men and a woman wearing black masks and homemade body armor -- one hefted a "shield" constructed from a traffic barrel -- shouted taunts to the distant police cruisers.

"They are the corporate assholes, the capitalists!" screamed another. "I hope they catch a bullet!"

Notably, some protesters replaced the last two words of the familiar "Mike Brown means we got to fight back!" chant with "Shoot back!"

Despite the rhetoric, the march remained peaceful as the crowd, swollen with students, reversed and walked back south along South Grand Boulevard. Then they turned around again. The cops followed.

Around 10 p.m. the crowd approached the Interstate 44 overpass. Instead of proceeding forward, the protesters followed seven men who had trotted down the eastbound on-ramp. Around 300 people joined them, and soon both the east- and westbound lanes were blocked with protesters. Another hundred or so protesters, apparently unwilling to block the interstate themselves, fanned out along the on-ramp to watch the spectacle. 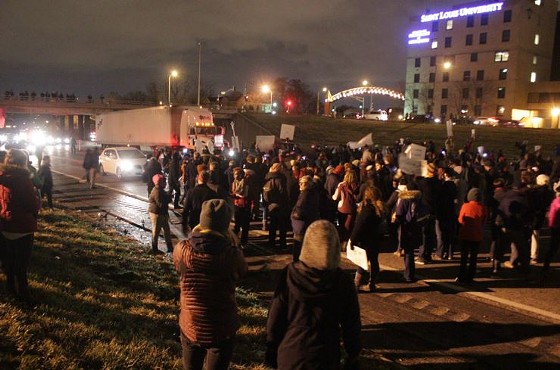 Police in riot gear soon showed up, and around 10:30 p.m. the cops had taken up positions on the overpass and on interstate, less than 100 feet from the front line of the protesters, who began chanting, "Fuck the law!"

The standoff lasted till about 11 p.m., when the police began advancing toward the interstate from the overpass and ordered the protesters to leave. The protesters complied. Daily RFT observed no bottles or objects being thrown at the police.

The bulk of the protesters moved back toward South Grand, where they were confronted with a newly formed line of police in riot gear.

"Time to go!" one female protester shouted to the crowd, urging people to walk south on Grand Boulevard, away from the police. "We had no arrests and injuries, we shut a major interstate down. We won. We don't have to get fucked up."

(According to St. Louis police, three protesters were arrested for "failure to disperse" as a result of the I-44 shutdown.)

The main group of protesters appeared to fragment, with some making the trek back to MoKaBe's. Others, however, took to smashing windows and burglarizing shops on South Grand.

Police in riot gear moved in, boxing in protesters and using tear gas to disperse crowds. Bricks and rocks were reportedly thrown toward police positions.

Lone man holds out in tear gas on South Grand in #STL pic.twitter.com/x3JwXJumkC

For the remaining protesters, the night ended where it began -- at MoKaBe's. As police surrounded the shop, activist Deray McKesson began tweeting that the cops were tear gassing the store.

The police just gassed MoKabe's! We are inside! #Shaw https://t.co/LZta4yFyx9

See, that's what I get for thinking I was ever safe. I was literally in the coffee shop sitting down on the phone. Then, tear gas. #Shaw

One round of tear gas wasn't enough, however, and MoKaBe's was hit again.

The police have said that if we leave the building now, they won't mass arrest us. All exits have been tear gassed. #Shaw

Hands Up to leave the building. America. #Shaw https://t.co/QiKlMeO46P

St. Louis police report that they made 21 arrests last night. Fifteen of those arrests were for felony charges, including unlawful use of a weapon, burglary, arson and property damage. Six arrests were for the municipal ordinance violation of failure to disperse. In addition 21 businesses along South Grand Bouleavrd had their windows smashed, according to police.