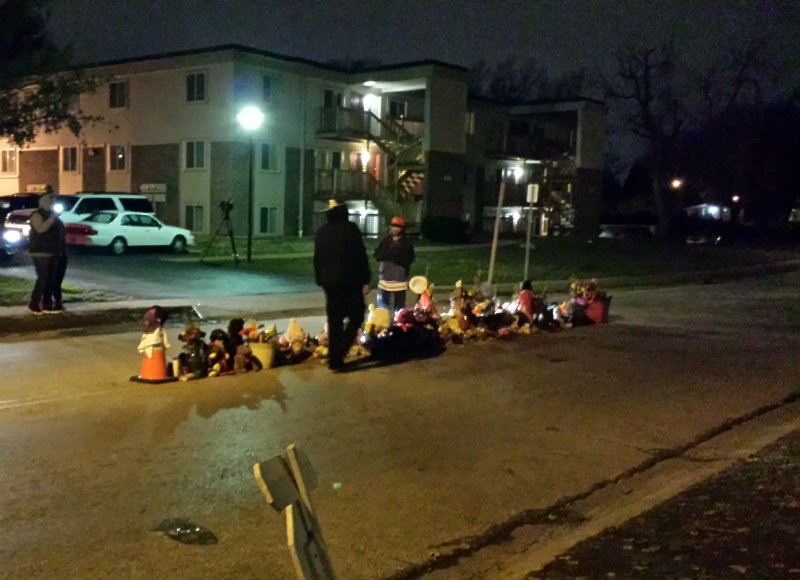 The site of Michael Brown's killing has become particularly dangerous for media members in the last 24 hours. A crew of four freelance journalists was robbed at gunpoint this evening around 8 p.m. as they tried to film a segment at the Canfield Drive memorial.

Emily Molli, a freelancer filing for Chinese network Xinhua News Agency, said she was standing behind the camera while her colleague Marcus DiPaola was filming. She said she saw a large group of young men wearing masks and carrying guns walk towards them.

The crew packed up and began walking to their car, but Molli and DiPaola said the men followed them, yelling. The reporters managed to make it inside their Prius before the group caught up and began smashing the windows.

"One guy pulled [the car door] back open, got a gun out of his backpack and pointed it at my head. He tells me to get out of the car and give me the keys," said Molli. "That's what I did."

See also: [VIDEO] "We're Ready to Fight": Ferguson Protesters React with Fury After Grand Jury "Fifteen to twenty males followed us with guns and hammers out," confirmed DiPaola. "Every single one of them had masks on."

DiPaola, Molli and their colleagues escaped on foot, and said they were saved by a church group who just happened to be in the neighborhood delivering Thanksgiving turkeys. The church group helped take them to a police checkpoint, which is where they were when Daily RFT spoke to them.

DiPaola sent out this warning to other journalists via Twitter:

All reporters: PLEASE DO NOT GO TO CANFIELD MEMORIAL. Was attacked and robbed at gunpoint.

DiPaola and Molli said a large video camera, their car keys and their wallets were taken.

The Ferguson Police Department is handling the report and investigating the matter.

"There are several roving groups of people committing opportunistic crimes," Chief Thomas Jackson wrote in an email. "We are working to get this under control."

The Xinhua crew were not the first journalists who were threatened by masked men on Canfield Drive today. Earlier, St. Louis Post-Dispatch reporter Paul Hampel stopped by the memorial and said he immediately got a very bad vibe from some of the young men wearing black bandanas over their faces. Markese Mull, an activist who lives on Canfield, intervened after Hampel received an angry response from the group.

"These young guys...they're getting all grouped up right now. They're real mad right now. I guess they don't want to be filmed," said Mull. ""I had to tell them [Hampel] was all good."

But even after Mull vouched for him, Hampel said he was given a stern warning by yet another young man who walked up.

"He came up and said, 'You think you're safe here?' and I told him, I said, 'No, I don't feel totally safe here to be honest,'" said Hampel. "He said, 'If you want to get out of here fucking alive you better leave fucking now.'"

Hampel posted a series of tweets this afternoon as a kind of warning to other journalists about his experience:

Markese Mull,39, begs the young men to desist from violence. "Stay alive in this!" #Ferguson https://t.co/gKISkCh6HZ

The crowd of young men is growing here and one of them just told me that I had better leave if I want to leave alive. #Ferguson