St. Louis County prosecutor Bob McCulloch plans to release most of the evidence and testimony heard behind closed doors by the grand jury. That information includes testimony transcribed by a court reporter, selected photographs, video/audio recordings and other reports, according to court documents; it doesn't include autopsy photos or the names of grand jurors.

Note: Riverfront Times will update this story with details from our reporter at McCulloch's press conference in Clayton. Check back.

The prosecutor provided an official telling of many of the details that had already made their way into media reports over the past three months. At around 11:45 a.m. on Saturday, August 9, Darren Wilson was dispatched to Northwinds Apartments to aid a child who was having difficulty breathing. While on that call Wilson heard over his police radio details of a "stealing in progress" of cigarillos from a Ferguson market. After EMS arrived to take the child to the hospital, Wilson got back in his SUV and headed west on Canfield Drive. He observed Brown and another individual walking down the middle of the street and told them to get on the sidewalk. Brown and his companion continued down the street at which point Wilson realized that Brown matched the description of the suspect who'd stolen the cigars. Wilson radioed at 12:02 p.m. that he was confronting the suspects and backed his Chevy Tahoe up to block their path.

From witness statements, McCulloch says it's generally agreed upon that there was then an altercation ("a tug of war, wrestling") in the car between Brown and Wilson at which point Wilson fired two shots from inside the vehicle. One struck Wilson in the thumb. Another lodged into the inside of the door. In addition, Brown's blood was found on the outside of the two driver's side doors and on the inside of the driver's side door. Moreover, Brown's blood was found on the Wilson's pants, shirt and gun.

Most witnesses stated that Brown then took off down Canfield Drive and Wilson gave chase. At some point Brown stopped as did Wilson. Witness statements conflict on whether Brown had his hands up at this point with some saying he had them to his side, while others told investigators that his hands were at his chest, closed in a fist and in a running position. According to McCulloch, most witnesses said that Brown then moved back toward Wilson with some describing it as walking, stumbling and at least one describing it as charging.

Wilson fired a total of twelve shots -- two in the car and the rest on Canfield Drive. At least six of those shots hit Brown with the victim having gunshot wounds to the right bicep, right forearm, upper right front arm, lateral right chest, upper right chest, forehead and top of the head. Brown's body fell 153 feet east of Wilson's patrol car, and blood was found an additional 25 feet east of where he died. The entire incident transpired in less than 90 seconds.

"I am ever mindful that this decision will not be accepted by some and may cause disappointment for others," McCulloch said near the end of his 25 minute address to reporters. "But all decisions must be made by the physical and scientific evidence and the credible testimony corroborated by that evidence -- not in response to public outcry or for political expediency."

We are profoundly disappointed that the killer of our child will not face the consequence of his actions. While we understand that many others share our pain, we ask that you channel your frustration in ways that will make a positive change. We need to work together to fix the system that allowed this to happen. Join with us in our campaign to ensure that every police officer working the streets in this country wears a body camera. We respectfully ask that you please keep your protests peaceful. Answering violence with violence is not the appropriate reaction. Let's not just make noise, let's make a difference.

Here's how McSpadden reacted, recorded by activists in front of the Ferguson Police Department:

Wilson released a statement through his lawyers:

Today, a St. Louis County grand jury released its decision that no charges would be filed in the case involving Officer Darren Wilson. From the onset, we have maintained and the grand jury agreed that Officer Wilson's actions on August 9 were in accordance with the laws and regulations that govern the procedures of an officer.

In a case of this magnitude, a team of prosecutors rightfully presented evidence to this St. Louis County grand jury. This group of citizens, drawn at random from the community, listened to witnesses and heard all the evidence in the case. Based on the evidence and witness testimony, the grand jury collectively determined there was no basis for criminal charges against Officer Wilson.

Law enforcement personnel must frequently make split-second and difficult decisions. Officer Wilson followed his training and followed the law. We recognize that many people will want to second-guess the grand jury's decision. We would encourage anyone who wants to express an opinion do so in a respectful and peaceful manner.

On a side note, Officer Wilson would like to thank those who have stood by his side throughout the process. This continued support is greatly appreciated by Officer Wilson and his family. Moving forward, any commentary on this matter will be done in the appropriate venue and not through the media.

In Ferguson, in front of the municipality's police station, chanting and crying followed the release of the announcement. A barricade gate separated police and hundreds of protesters, who chanted, "These killer cops have got to go," and "Show them what community looks like."

Protesters released a letter saying, "We still don't have justice."

The grand jury met on 25 separate days while investigating Brown's death. Jurors heard more than 70 hours of evidence from 60 witnesses. They reviewed hours of recordings and interviews, heard from three separate medical examiners and viewed hundreds of photos to determine whether Wilson should be charged with one of five crimes, ranging from first-degree murder to involuntary manslaughter.

McCulloch is not allowed to reveal how the grand jury voted. The jury needed nine votes to indict Wilson. 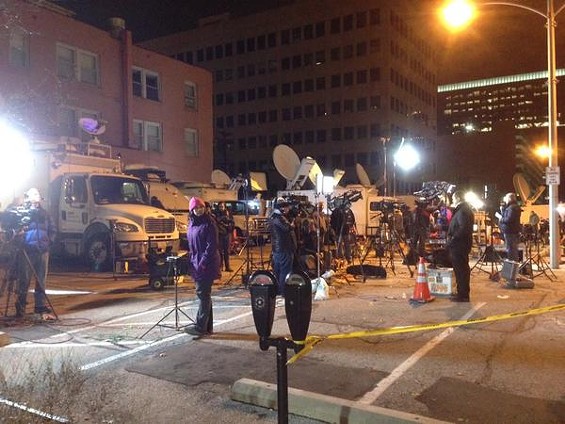 There's nothing typical about the grand jury tasked with investigating the fatal shooting that killed Brown near his grandmother's apartment in Ferguson. When the jury's term was set to expire in September, a judge extended it to January -- the maximum allowed. This grand jury also heard testimony from many witnesses, including Michael Baden, the forensic expert who performed a private autopsy on Brown at the family's request. Typically, grand juries only hear from a few people over the course of about one day.

Activists and protesters have been calling for Wilson to face criminal charges ever since he fatally shot Brown on August 9 after stopping him for walking in the street. Eric Davis, Brown Jr.'s cousin and a family spokesman, told Daily RFT in October that the Brown family would only be satisfied if Wilson were charged with first-degree murder.

But a first-degree murder seemed unlikely from the start.

"Murder-first is, I think, out of the question," Joe Hogan, a former St. Louis County prosecutor who now works as a defense attorney, told Daily RFT. "The term we use in Missouri for first-degree murder is 'cool deliberation.' There has to be a period of reflection, and it doesn't appear that there was in this situation."

Hogan thought second-degree murder was more likely since Brown was obviously unarmed when Wilson shot him.

"Missouri laws are pretty common sense," Hogan said. "If you shoot someone who's unarmed, you got to have a goddamn good reason."

But the grand jury decided that there wasn't enough evidence to support any indictment.

President Barak Obama addressed reporters from the White House about the decision. "First and foremost, we are a nation built on the rule of law and so we need to accept that this decision was the grand jury's to make. There are Americans who agree with and there are Americans who are deeply disappointed, even angry. It's an understandable reaction."

Obama said the issues facing Ferguson aren't restricted to St. Louis but are the same problems faced by the U.S. as a whole.

Governor Jay Nixon, who called for peace hours before the decision was announced, released this statement:

While the 12 men and women on the St. Louis County grand jury have concluded their work, the rest of us have much more work to do in order to use the lessons we have learned these past four months to create safer, stronger and more united communities.

As we continue to await word on the U.S. Justice Department's ongoing investigation, I urge all those voicing their opinions regarding the grand jury's decision to do so peacefully. I also urge everyone to continue working to make positive changes that will yield long-term social, economic and spiritual benefits for all our communities.

My commitment to the people of the region and state is this: I will do everything in my power to keep you safe and protect your right to speak. We must also make a commitment to one another: to trust more and fear less, to hold ourselves to a higher standard of personal responsibility and mutual respect, and to keep working to extend the promise of America to all our citizens.

It is my continued hope and expectation that peace will prevail. The world is watching. I am confident that together we will demonstrate the true strength and character of this region, and seize this opportunity to build a more just and prosperous future for all.