Business at Dellena Jones' 911 Hair Salon, one of the many boarded-up storefronts along West Florissant Avenue in Ferguson, is down 70 percent after protests started there in August.

It's a common story on this street, where the burned-out husk of the QuikTrip looms as a reminder of the weeks of unrest that followed the fatal shooting of Michael Brown. A local doctor says his business is down 35 percent, and he still needs to repair the windows and doors broken during the protests. A lawyer for Florissant Avenue businesses says his clients are "at a breaking point," still missing out on "millions and millions" of dollars in sales.

At the salon, Jones' clients are mostly women who come alone or with children after work to get their hair done. So when protesters line the streets and the threat of looting, arson or violence hangs in the air, regular clients cancel and walk-in traffic stays away.

"I can't get any workers in who want to work," Jones says. "If we don't have a walk-in base, the workers won't come to work."

Jones says she blames the outsiders who travel to Ferguson to protest only to leave the north St. Louis County municipality broken when they're gone.

"When they leave town, they go back to their peaceful, restful, nice little homes," Jones says. "There is an aftermath to that confusion. It hurts more than it helps." 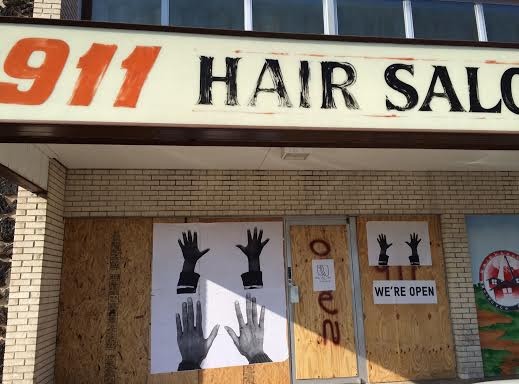 Derrick Thomas doesn't own one of the boarded-up storefronts, but he's lived in Ferguson since 1975 and says he cares about the businesses in his town.

"I love Ferguson, I love these stores," he says. If protesters are going to demonstrate on West Florissant Avenue after the grand jury decides whether Ferguson officer Darren Wilson faces charges for Brown's death, Thomas says he hopes they'll stay peaceful. "We don't need no more drama."

When protests first started in August, demonstrators blocked violent protesters from looting, setting fire or destroying businesses. Sam's Meat Market would have burned down if a Ferguson man hadn't rushed in, put out the blaze and saved the building, said the store's lawyer, Jay L. Kanzler.

But when protests start again, Thomas says he's staying away. "Gotta be in a house," Thomas says when asked where he'll be after the grand-jury announcement. "I don't want to be in the street like last time."

When asked how he's preparing for new protests, Adeluola Lipede, a doctor at Maranatha Health Care, motions to his boarded-up windows and shrugs.

Mohammed Yaacoub, owner of Sam's Meat Market, has a similar answer. His windows are boarded, sure, but there's one more thing he's doing to prepare: