When a dozen teen girls in blackface ran onto the Sullivan High School football field November 5 for a powder-puff game, Jennifer Schmidt recalls her gut reaction as, "Oh my gosh."

"And then I thought, 'Oh, they don't mean anything by it. Just let it go. No one thinks anything of it.' I didn't think anyone did," says Schmidt, the principal of Sullivan High School. "Evidently, someone did."

Evidently indeed. Photos taken during the game show twelve members of the senior class wearing dour expressions beneath full-blown blackface, and someone at the game shared those photos on Facebook. The reactions to the photos have been rippling within the small town of Sullivan (60 miles southwest of St. Louis) ever since.

The girls, says Schmidt, have been "very embarrassed and shocked at some of the responses they've gotten, because I think some people had some stuff on Facebook and got the wrong intention."

The powder-puff football tournament is a yearly tradition at the school, says Schmidt. Organized by the junior class, each grade fields a team, the football coaches stand in as referees, and members of the boys' varsity football team act as coaches. The entrance fees from the tournament benefit prom.

"It's just a fun kind of fundraiser," Schmidt says. "There were a few people in the crowd, not a lot. It was cold."

Photos of the game later appeared on the athletic department's Twitter feed. Schmidt tells Daily RFT that photos were intentionally taken at a distance, to the point where it's impossible to discern the painted faces. (The tweets were later deleted, but we nabbed screenshots.) 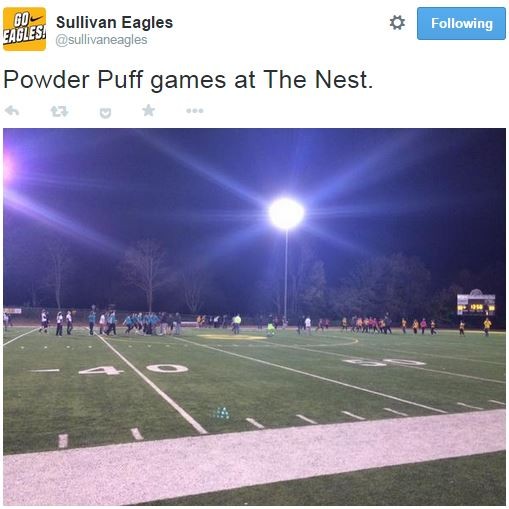 Schmidt adds that it's been common practice for the senior girls' team to wear face paint during the powder-puff football tournament, essentially as a parody of the eye black football players normally wear to decrease glare from the sun and lights. The face paint also serves to "to intimidate the underclassmen."

According to Schmidt, in previous years the girls have wore combinations of the schools' colors — black and gold. But when the senior girls arrived prior to the November 5 game, they discovered everyone had brought the same color face paint — black.

"So that's what they wore," says Schmidt. "There was nothing racial about it. They didn't have any other intention other than to just try to intimidate the underclassmen."

Schmidt tells Daily RFT that the school hasn't taken any disciplinary action against the students in the photos.

"I can assure you they will not be wearing black face paint again," she says. "In fact, we're probably just going to end the face-paint thing, and nobody wears any at all."

Leigh Kolb, an English and journalism instructor at East Central College in the nearby town of Union, encountered the Sullivan High School photos the day after the powder-puff game, when one of her students showed her the images during a class discussion about the history of blackface.

"It was pretty clearly offensive to us," says Kolb, who also teaches courses on composition, media diversity and African American literature. "It's an example of...likely not egregious and malicious intent, but a lack of historical context."

This lack of knowledge, says Kolb, isn't just restricted to girls' powder-puff football games. During the same class, a student showed Kolb a Twitter photo from a Washington man who dressed as Darren Wilson for Halloween — along with a friend who donned blackface for a Michael Brown costume. 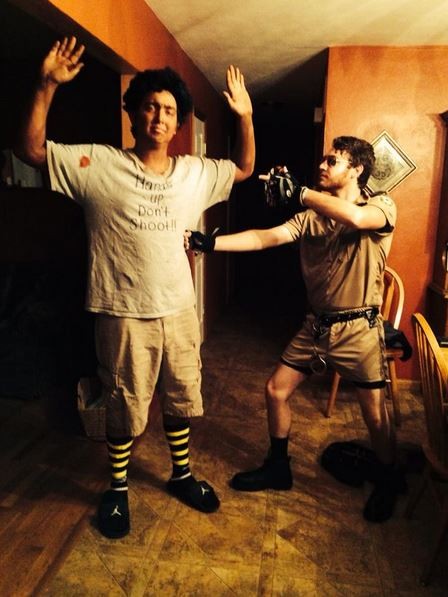 Continue for another awful Halloween blackface photo, and Kolb's method of teaching students about the history of blackface.

See also: 9 Questions to Ask Yourself Before Dressing like a Ferguson Protester for Halloween 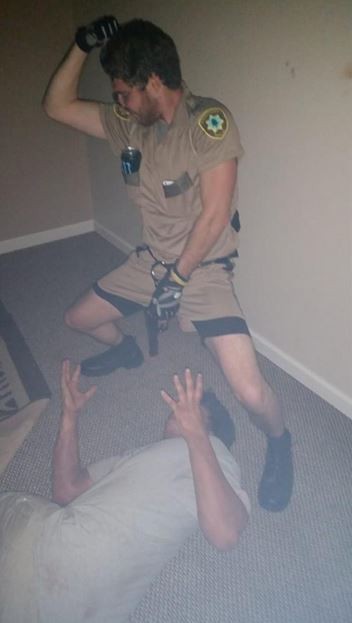 Kolb says these two examples of blackface — from the same geographic area — speaks to the widespread ignorance of black history within overwhelmingly white towns like Sullivan and Washington.

"People are so uncomfortable talking about race, and when you try to have a conversation about race in America, you see a wall go up in front of people's faces," she says. "Critical, sympathetic and analytic thought just goes out the window."

That's why Kolb thinks it's most helpful to introduce the topic of racism and blackface in broad terms — that is, to address the history of systemic or cultural racism, as opposed to labeling a particular person as racist and working outward.

The blackface Halloween costume provides Kolb a perfect example of that conversational breakdown. The photos, posted on November 1 by a Twitter user named Justin, elicited immediate criticism and accusations of racism. In response, Justin demonstrated what happens when, as Kolb predicted, your "critical, sympathetic and analytic thought flies out the window." 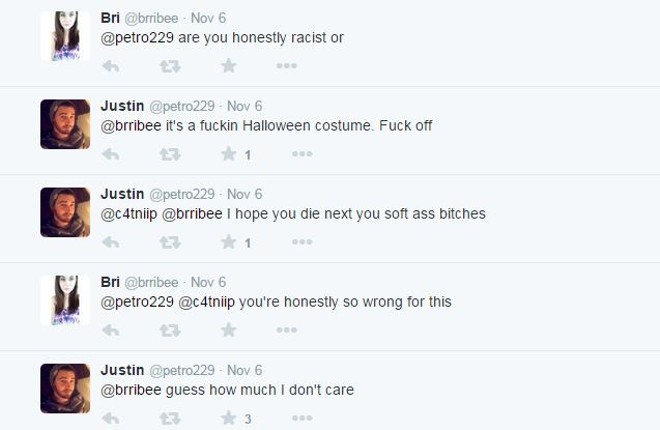 It's also possible that Justin is a Twitter troll.

The way Kolb sees it, there's no way Justin would consider dressing up in blackface — or equating his buddy's Michael Brown costume to a hypothetical black person dressing up as Klansman — if he knew some basic history.

For instance, one fact Justin might want to know is that the Jim Crow era — known for the racist segregation laws that ruled many U.S. cities and states until 1965 — got its name from an early blackface "performer" named Jim Crow, who helped popularized minstrel acts in the 1830s and 1840s.

"Connecting the original Jim Crow performer's blackface to Jim Crow laws puts it all in context," she says. "It's not about the individuals, it's about a lack of sensitivity for both the historical context of blackface and the Michael Brown situation itself, which many of us see as indicative of much larger issues surrounding institutional racism."

If you're interested in learning more about the history of blackface, Kolb recommends this detailed FAQ on the subject from PBS, as well as a "A Brief History of Blackface," authored by a North Carolina State University associate professor Blair L. M. Kelley.