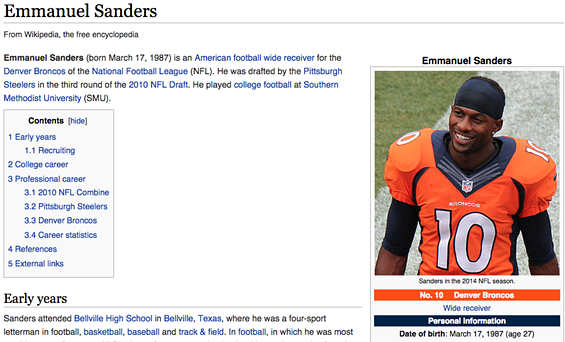 Denver Broncos receiver Emmanuel Sanders died for a few minutes, then returned to life during Sunday's game against the St. Louis Rams -- at least, that's what it said on Wikipedia.

Sanders was taken out of the game after an extremely brutal hit from Rams safety Rodney McLeod, who was blocking Sanders from making a sideline catch in the third quarter. The hit left Sanders reeling on the field for a few minutes until medical staff helped him off to evaluate him for a concussion.

Sanders' "death" was removed from the page shortly after.

As for McLeod, referees whistled him for a fifteen-yard penalty for the lay-out, which is already being called "the most vicious hit of the NFL season." Replays seem to show McLeod led the hit with his shoulder, not his helmet, but it's unclear whether he made contact with Sanders at or above his shoulders. Before getting grounded by McLeod, Sanders scored the Broncos' only touchdown. Daily RFT wishes him a speedy recovery.

The other can't-miss video from last night's game is thanks to QB Shaun Hill, who amazingly caught his own throw: