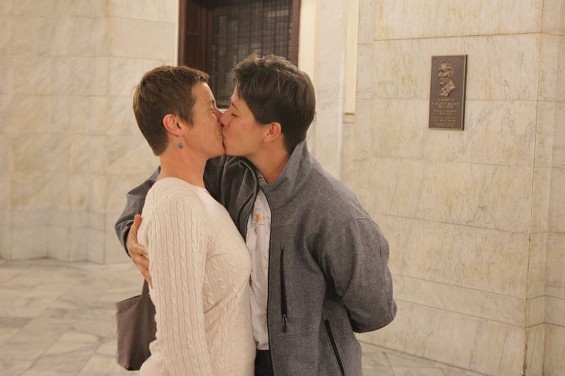 More than 3,000 Missourians have signed a petition that asks Koster not to appeal so the state can, as the petition says, "put this ban to rest once and for all."

"It's time that committed couples in Missouri no longer live in a gray area," says A.J. Bockelman, executive director of PROMO, a statewide LGBT organization.

Koster has already appealed the ruling, which sends the case to the Missouri Supreme Court, but same-sex marriage supporters hope the petition will change his mind before the 30-day deadline.

"The constitutional challenge to Missouri's historically recognized right to define marriage must be presented to and resolved by the state's highest court," Koster said in a statement.

Koster has said he personally supports gay marriage but fights against it in court because it's his job.

"As Attorney General, I cannot pick and choose the portions of our constitution to uphold," Koster said in a statement earlier this year. "While I would personally vote to repeal the ban, I have a duty to my oath and to the people of Missouri who adopted the constitutional provision."

Though he is appealing the ruling legalizing gay marriage in Missouri, Koster says he won't stop couples from obtaining marriage licenses until a court rules otherwise.

Here's what the petition says:

On November 7, U.S. District Court Judge Ortrie D. Smith ruled Missouri's marriage ban unconstitutional. Attorney General Koster released a statement, shortly thereafter, stating that he WILL appeal this decision to the 8th Circuit Court. Sign this petition and urge Missouri Attorney General Chris Koster NOT to appeal the decision, so we can put this ban to rest once and for all.

Just last month, Attorney General Koster said, "Missouri's future will be one of inclusion, not exclusion." Sign this petition urging him to stick by his words and not appeal the ruling from November 7.

And here's a copy of the appeal: