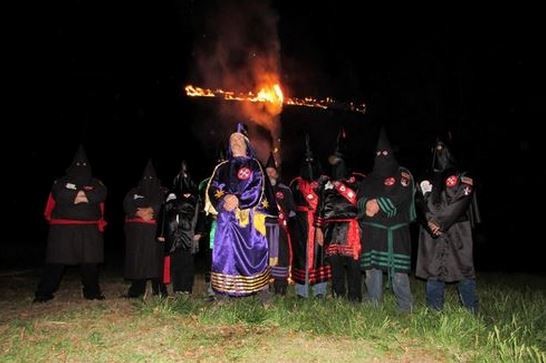 The head of Missouri's most visible KKK group claims his "Klanline" is being flooded with calls from prospective recruits angered by the continuing protests in Ferguson.

"Missouri is definitely on fire right now," says Frank Ancona, the imperial wizard of the Traditionalist American Knights of the Ku Klux Klan. In the past the group made headlines by passing out fliers for a KKK neighborhood watch program, but Ancona tells Daily RFT the Ferguson protests are attracting a new wave hopeful hood-wearers. He says he's inducted 50 new members to the group's Missouri chapter this month, and numbers are up in Ohio and Alabama as well.

"These Ferguson protesters are the best recruiters since Obama," he says. "Normally we might hear from ten people a week in Missouri, and now we're hearing from more like fifty people a week. Sometimes, depending on these news stories, we get 100, 200 calls in a day."

Update: See below for a statement from the Southern Poverty Law Center, which lists the Traditionalist American Knights of the Ku Klux Klan as an active hate group.

When we last checked in with the publicity-friendly Ancona, he was engaged in a feud with a South Carolina-based KKK group that allegedly threw a September fundraiser for Darren Wilson, the Ferguson officer currently under grand jury investigation for the August 9 shooting of unarmed teen Michael Brown.

"Personally, I think we need to wait until we see all the facts, all the evidence that's being gathered.... I don't want to try to gain or exploit this situation." he told Daily RFT in late August.

But Ancona says the time for such restraint is over. He cites death threats made against police officers on social media and statements from outspoken activists, such as notoriously inflammatory livestreamer Bassem Masri, as reasons the Klan can no longer stay on the sidelines.

"I call them terrorists, not protesters," he says.

Yesterday, Ancona's group released a flier that promises to use "lethal force" in response to violent protesters.

"You have awakened a sleeping giant," the flier reads. "The good people of St. Louis County of all races, colors and creeds will not tolerate your threats of violence against our police officers, their families and our communities."

"You have been warned by the Ku Klux Klan!" it concludes. "There will be consequences for your acts violence against the peaceful law abiding citizens of Missouri."

It's unclear who released the flier, which began circulating on Twitter on Tuesday afternoon. Ancona says his group will begin distributing paper copies in the coming days. The group has reportedly passed out literature in other locations in St. Louis County, including the San Simeon Estates and Capetown Village subdivisions in High Ridge, according to the St. Louis Post-Dispatch.

Members of the Missouri KKK group will also be on the scene of any unrest following the grand-jury decision, Ancona promises. He says many of the calls he's received are from concerned citizens asking for Klan protection.

"We're basically going where we're being asked to go," he says. "We're being low key, we're not trying to inflame any situation anywhere, but we're also letting it be known that we're here to help people if they need us."

When asked if there was a racial component to the KKK's involvement, Ancona pointed to the "all races, colors and creeds" line in the flier. He insists that he's not encouraging racism or violence against black protesters.

"It would hypocritical for us to pin this on the black race when you can clearly watch footage on TV and you see white people as well as black people," he says. "All those people need to be on notice."

Here's the full text of the flier:

Update: The Southern Poverty Law Center, a civil rights group that has long opposed the KKK and actively monitors hate groups across the county, has issued a response to Ancona's flier:

"It's sickening but not surprising that Klansmen would throw fuel onto an already volatile situation by threatening violence against protesters in Ferguson. After all, the Klan is America's oldest racist hate group and has been responsible for some of the heinous acts of domestic terrorism this country has seen, all in the name of white supremacy," says Lecia Brooks, SPLC outreach director, in a statement. "This group's threat of using 'lethal force' is nothing but vigilantism and has no place in America. Local law enforcement should take note."

The Traditionalist Knights' outreach attempts are no surprise to the SPLC, which lists the group among five active KKK offshoots in Missouri.

According to a recent SPLC report, Ancona's boastfulness is hardly backed up by the national decline in Klan population. Based on the SPLC's annual count of hate groups and their chapters, there are, at most, 4,000 to 6,000 Klansmen in American today, and the number of Klan chapters (or klaverns) dropped from a recent high of 221 in 2010 to 163 in 2013.

The report quotes Mark Pitcavage, director of investigative research for the Anti-Defamation League, who characterizes the recent history of the KKK as alternating between stagnation and decline. And when it comes to the KKK's claims of resurgence, he's more than a little skeptical.

"It's common for extremist groups in general, and Klan groups in particular, to make extravagant claims about their membership," Pitcavage warns. "But the reality is that they can never back up those claims with real-world evidence."

Anocna and the Traditionalist American Knights are mentioned by name in the SPLC report, which describes the group's distribution of fliers and supposed neighborhood watch group. The report cites Ancona's feuds with other Klan leaders -- one of whom accused Ancona of being Jewish -- as an example of how petty and powerless the contemporary KKK has largely become.