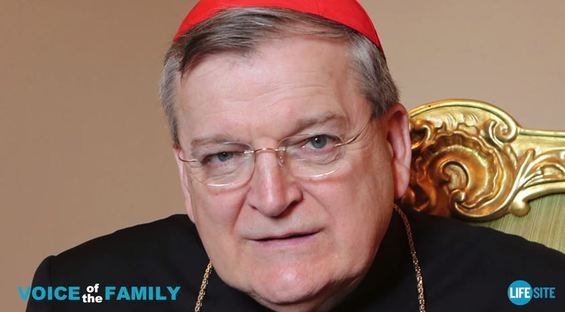 On Saturday, the pope made the demotion official. Burke has been removed from his lofty position as prefect of the Apostolic Signatura, the Catholic church's highest court, to be replaced by archbishop Dominique Mamberti, who was serving as the Vatican's foreign minister.

"I very much have enjoyed and have been happy to give this service [to the Apostolic Signatura], so it is a disappointment to leave it," Burke told Buzzfeed, adding later, "I trust that by accepting this assignment, I trust that God will bless me, and that's what's in the end most important."

Vatican observers have called the demotion "unprecedented" and an "eminent decapitation," especially since Burke's new job as the honorary head of the Sovereign Military Order of Malta is a largely ceremonial position.

"The position of patron of the Order of Malta is usually given to a retired cardinal, or as a second task to an active cardinal," according to the National Catholic Reporter. "It has almost no responsibilities."

Burke, a highly conservative church leader, once told St. Louis voters it was a mortal sin to vote for a candidate who supports abortion rights and told the Catholic world recently that gay relationships are "always and everywhere wrong, evil" even as the church considered broadening rights for LGBT followers.

Burke's demotion isn't the result of a personality clash between Burke and the pope, but rather indicates that the church could be headed in a new direction, said Frank Flinn, a retired adjunct professor of religious studies at Washington University, when Daily RFT first heard about Burke's demotion in September.

"The pope wants to turn the offices of Church aback into to services of Christ," Flinn said. "He aims to just change the whole idea of what bishops and priests and clergy do. They are to serve the people, to serve the members of the Church. If there is one theme to his papacy, that is going to be it."

And Burke won't be a big part of the papacy's direction. "[Burke] is removed from all power," Flinn said.

The Archdiocese of St. Louis released a brief statement congratulating Burke on his new role:

The Archdiocese of St. Louis extends prayerful congratulations to its former Archbishop and Archbishop Emeritus, His Eminence Raymond Leo Cardinal Burke, as he assumes his new role of cardinal patron of the Knights and Dames of Malta.