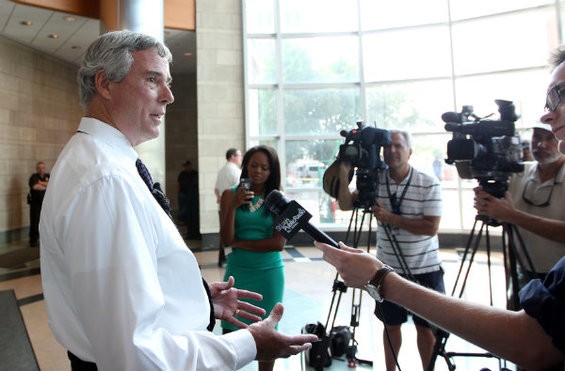 As St. Louis anxiously awaits the decision in the grand-jury case against Ferguson police officer Darren Wilson, St. Louis County Prosecuting Attorney Bob McCulloch and his office have repeated that nothing will be announced before November 15.

The rumor mill says otherwise. Many St. Louisans said the announcement would be tied to Veterans Day on Tuesday, when public buildings and schools would be closed, but McCulloch's office dismissed the rumors as guesses, not facts.

UPDATE: McCulloch released a new statement confirming the grand jury decision won't come out this week. Read the release below. End of update.

The grand jury has been meeting since August 20, more than a week after Wilson fatally shot unarmed teen Michael Brown in Ferguson. A judge extended the grand jury's term to January 7, allowing the jury to continue the process into 2015.

Trying to cut through the rumors and guesses to find out when the big day will finally arrive? Here are five separate reports quoting McCulloch or his spokesman Ed Magee on when to expect a grand jury decision:

1. USA Today On Sunday, Yamiche Alcindor reported that the grand jury's decision is expected "on or after November 15." Alcindor's report also says McCulloch's office hasn't officially decided how to announce the decision to media and the public.

2. Riverfront Times Magee told Daily RFT on November 4 that mid-November is the earliest possible date for the verdict's release.

"We're still saying mid-November -- at the earliest," said Magee. "And that's what we're going to say until we get there."

But what about the Veterans Day rumors?

"Rumors don't matter," replied Magee. "All that matters is what you hear from us, and what we're still saying is mid-November at the earliest."

3. KSDK (Channel 5) Magee told KSDK last weekend the grand jury is still hearing evidence. The news station reported "there won't be any announcement until next weekend at the earliest," meaning the weekend of November 15.

4. The Washington Post WaPo asked McCulloch's office Friday when the grand jury announcement will be released. The answer? "Mid-November."

5. The St. Louis American While McCulloch's office originally estimated that the grand-jury decision could be announced in early November, a representative told the American on October 30 that St. Louis will have to wait until "mid-November at the earliest."