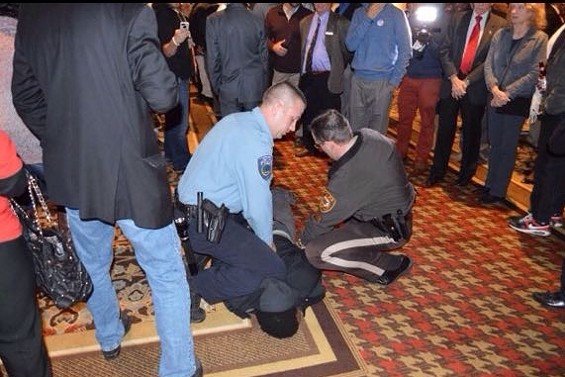 The chants from supporters of Democrat Steve Stenger started as a celebration. After a night of trailing opponent Rick Stream, the first Republican to have a strong showing in a St. Louis County leadership election in decades, Stenger eeked out a victory in the race for county executive by a minuscule margin of fewer than 2,000 votes.

But the celebratory chanting at Stenger's Clayton victory party became louder and more forceful when supporters realized Ferguson protesters had infiltrated the event, shouting slogans of their own, such as "Free speech" and "Fight back," and singing, "Whose side are you on," the labor movement chorus from the 1930s.

Police escorted about two dozen Ferguson demonstrators out of the victory party, mostly while Stenger attempted to give a speech thanking supporters. Stenger pointedly thanked law enforcement during his brief remarks, spurring cheers from the excited crowd as an officer took another protester outside.

Protesters have been calling on Stenger to cut ties with St. Louis Prosecuting Attorney Bob McCulloch, who heads the grand-jury investigation into the shooting death of unarmed teen Michael Brown in Ferguson.

"It's shameful that Stenger, a Democrat, stood by and allowed police to arrest local leaders instead of addressing the No. 1 issue in St. Louis County right now: our broken policing system," says Jamala Rogers, former chair of Organization for Black Struggle.

Police detained several protesters, including Montague Simmons, chair of Organization for Black Struggle, but it wasn't immediately clear if charges would be filed.

McCulloch, who attended Stenger's victory party but was not front and center like he was when Stenger won the primary, said in media interviews that the grand jury would not decide on Wilson's case until at least mid-November. Protesters demanded that McCulloch announce "a real timeline" for the grand jury's decision.

"Bob McCulloch has failed the citizens of Ferguson and St. Louis by refusing to aggressively prosecute this case and hiding behind a confusing grand-jury process," said Jelani Brown, member of Organization for Black Struggle. "The least he can do is give the public a date when this decision will come down, in the interest of public safety."

Stream conceded the race around midnight, though his loss was so narrow that he could call for a recount.