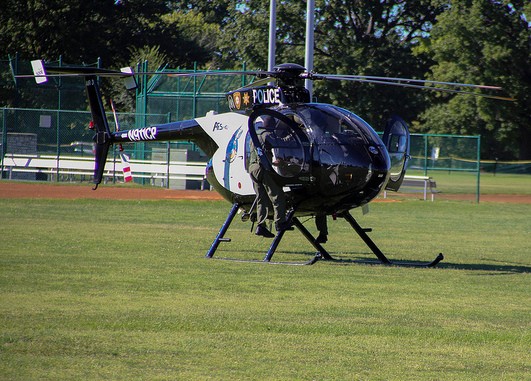 The White House and the St. Louis County Police Department disputed an Associated Press report Monday that said the no-fly zone imposed over Ferguson during August protests kept media helicopters away while allowing other traffic.

When the Federal Aviation Administration first imposed the 37-square-mile flight-restriction zone August 11, officials told media it was to protect aircraft from demonstrators protesting the death of eighteen-year-old Michael Brown in Ferguson, which is near Lambert St. Louis International Airport. Police said people on the ground fired guns and pointed lasers at a police helicopter.

But audio recordings between the FAA and police, obtained by the AP, seem to tell a different story. The recordings show aviation officials and police trying to word a flight-restriction order to allow commercial and police, but not press, flights.

On the tapes, an FAA manager tells a police official the restrictions will allow planes to land at the airport but "will still keep news people out....The only way people will get in there is if they give them permission in there anyway so...it still keeps them out."

A police captain answers: "I have no problem with that whatsoever."

Chief Jon Belmar responded Monday by saying the tapes released by the AP were "out of context."

"At no time did we request that only media be kept out of the airspace," Belmar said. "I can tell you that myself, [St. Louis Metropolitan Police] Chief Dotson, [Missouri State Highway Patrol Captain] Johnson, everyone else who was in the arena during this, we didn't have those types of discussions in the unified command."

White House spokesman Josh Earnest told the AP the no-fly zone should not have restricted media access after it was updated August 12 to reduce the altitude to 3,000 feet from 5,000 feet, as long as the helicopter carried accredited reporters.

"In this case, what the FAA says is that they took the prudent step of implementing the temporary flight restriction in the immediate aftermath of reports of shots fired at a police helicopter, but within twelve to fourteen hours, that flight restriction was updated in a way to remove restrictions for reporters who were seeking to operate in the area," Earnest said.

Belmar read the transcript of a 911 call made August 10 from a Ferguson resident who saw people fire a pistol at a helicopter. Police also released an audio clip of a helicopter pilot reporting being hit by a laser to a command center on August 19.

"It's always all about safety," Belmar said. "That's just the bottom line on this. We don't have the ability to preclude people out of there for any other reason other than that. And had we just wanted to move the media away from this arena we would have started that on the ground and that's not what happened."

Belmar said police haven't yet decided if they'll impose another no-fly zone after the grand jury decides whether or not to indict Darren Wilson, the Ferguson police officer who fatally shot Brown.