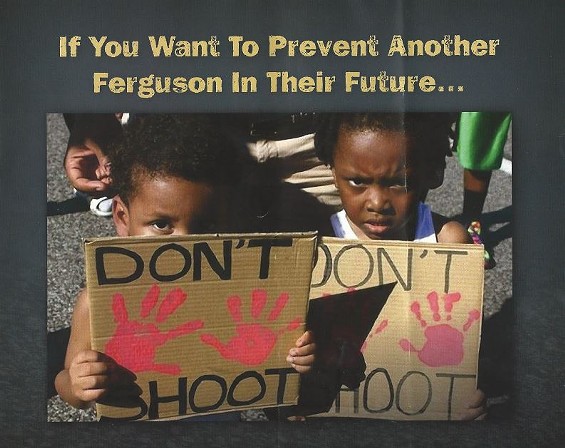 In at least four states around the country, campaigns are referencing the shooting death of Michael Brown to encourage black voters to go to the polls today. No matter which state they're in, the mailers have a clear message: If you don't vote, what happened in Ferguson could happen again here.

In Georgia, where a big Senate race is still too close to call, the Democratic Party sent out a mailer featuring two toddlers holding "Don't Shoot" posters under the header, "If you want to prevent another Ferguson in their future...Vote."

Inside the four-page mailer is an explanation of who Michael Brown was, how he died and how disproportionately white Ferguson's law enforcement and leaders are. On one page, a Ferguson protester kneels in the street with arms raised in a cloud of smoke from police flares. 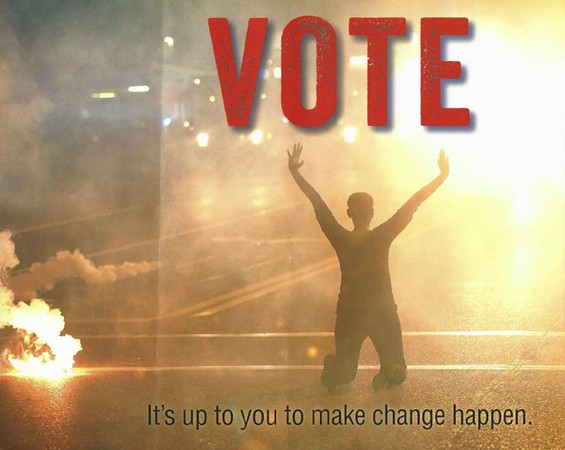 "Our state and our democracy are stronger when more people participate, and we have seen what happens in places like Ferguson, Missouri, when voices are silenced," party spokesman Michael Smith tells Politico.

Activists have used Brown's death especially to amp up early-voting efforts. The group Vote Mob is passing out these stickers in Atlanta:

Stickers being given out by Vote Mob volunteers in Atlanta area. A sign of #Ferguson-themed GOTV. #wpteamamerica pic.twitter.com/Yk22hYinSz

In seven states, including Illinois, a flier featuring a black man with his hands up in front of a police line tells black families to vote so police will "stop targeting our children." The mailer comes from Color of Change, a California-based 501(c)(3) originally founded after Hurricane Katrina in 2005.

"If we want to end senseless killings, like Michael Brown in Ferguson, Missouri, we need to vote," the flier reads.

Color of Change tells the St. Louis Post-Dispatch it sent fliers to black people who voted in 2012 but not 2010 in Illinois, Michigan, North Carolina, Georgia, Florida, Arkansas and Louisiana.

Voters see the same thing in Louisiana, where a flier showing two black people with their hands raised asks blacks to vote and put an end to police brutality.

"Ferguson has taught us that when African-Americans do not vote, local police departments are not accountable to our community," the mailer reads. "Rights are abused. Justice is denied." 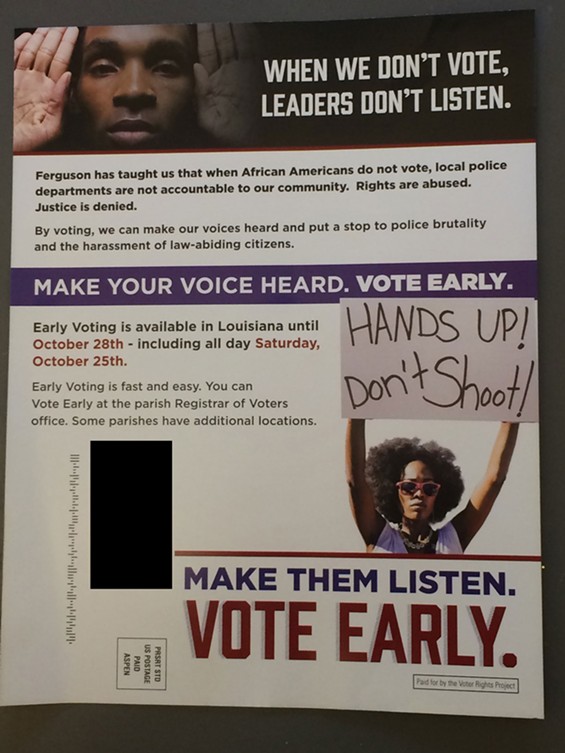 Where the mailer came from is still a bit of a mystery. The flier says it was paid for by the Voter Rights Project, but a Politico investigation showed there are no records for that group.

North Carolina has the most graphic ads of all, including one with a black-and-white photo of a lynching. That mailer doesn't mention Ferguson; instead it warns of President Barack Obama's impeachment if blacks don't vote.

Another North Carolina mailer shows a black man on his knees, arms raised, as two armed, white police officers approach, surrounded by the words: "This won't ever end. Until we vote." 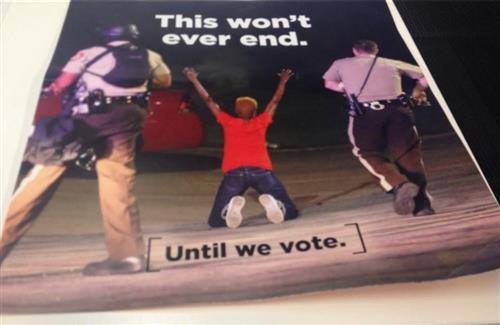 "On the streets of Ferguson, in a Wal-Mart in Ohio, and in too many other places across the country there is a painful lesson to be learned," the mailer says on the back side. "When we don't vote, local police departments aren't accountable to the community."

The flier also names the Voter Rights Project as its sponsor, though journalists have been unable to find listings for the group or track down members.