Governor Nixon Tweets Butt Crack Photo to Get Out the Vote

It's Election Day! Are you voting? Because Governor Jay Nixon sure is.

This is the Show-Me State after all, so Nixon tweeted proof that he fulfilled his electoral duties this morning, saying: "Voting in #JCMO this morning. Make sure to cast your ballot and make your voice heard. #Election2014"

But we're guessing he (or whoever tweets for him) didn't look closely enough at the photo before publishing.

Here's a screenshot of the tweet, which Nixon has since deleted: 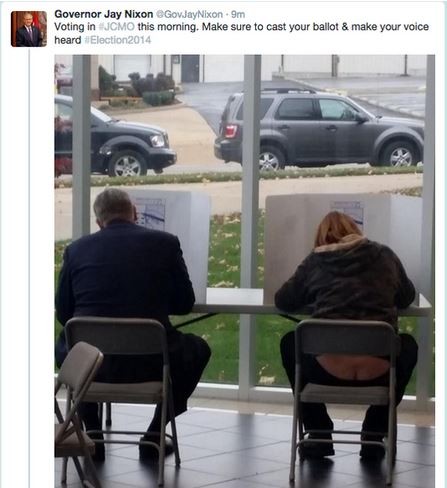 If two inches of intergluteal cleavage won't convince you to go to the polls, nothing will.

It's too bad Nixon's camp deleted the photo instead of running with the gag, especially since it's 2014 and nothing deleted from the Internet is actually deleted. Here's the inevitable butt crack blowback on Twitter:

.@mattdpearce You could say he took... [removes sunglasses] ... a second crack at it.

In @GovJayNixon's defense, the Plumbers Crack Vote is a key demographic in Missouri. http://t.co/BXGViTfGkC

Seriously. The Nixon staffer is sh@#ing their pants right now.

So much for mending the political divide.