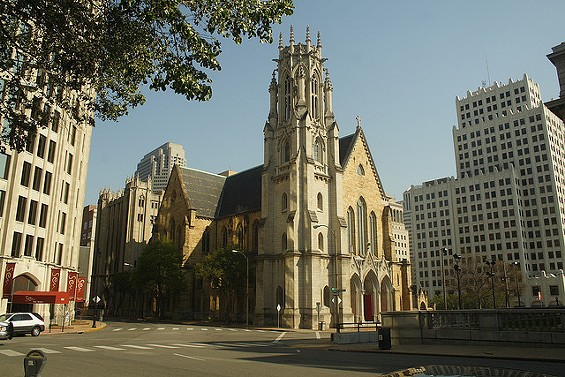 Some time between now and January, the news will break that Ferguson police officer Darren Wilson is or isn't charged with a crime for fatally shooting unarmed teen Michael Brown. For now, protests in Ferguson have calmed into small demonstrations, but if Wilson is released without any charges, those demonstrations could grow again into violence and looting.

"If there isn't an indictment, we're going to see the same thing again," Antonio French, a St. Louis alderman who was on the front lines of Ferguson protests, told Daily RFT weeks after Brown's death. "That's predictable. It's going to get bad."

Christ Church Cathedral responded to the fear last week by announcing a 24-hour vigil once news about the grand jury investigation gets released.

The church's leaders say they're opening up the church for group and silent prayer, singing, reading and counseling as a non-violent alternative for any experiencing what the church calls "deep brokenness" after Brown's death. People of any faith or background can stay the entire 24 hours or pop in and out for a few minutes at a time.

"We know this decision will be a crisis point for our region," says the cathedral's dean Mike Kinman. "Even the anticipation of it has put St. Louis in a place of fear, anxiety and high reactivity."

The church, at 1210 Locust Street, will open Bofinger Chapel, off the side of the cathedral nave, for people who want to talk to trained counselors, church leaders or facilitators about the grand jury's decision. It will be a place of non-violent reflection and healing, not debate, the church says.

"I believe violence in any form is not only contrary to the Gospel of Christ, but contrary to our hopes for lasting change for justice," says Kinman. "We are holding this vigil because our deepest hope is that the response to the grand jury announcement is powerfully nonviolent."

Until then, there's little to do but wait.