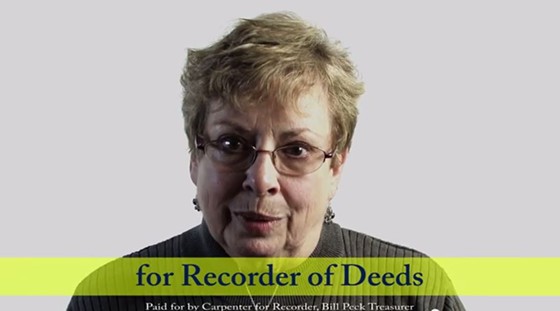 Former Recorder of Deeds Sharon Carpenter misspent $130,274.08 of city funds between July, 1 2010 and and June 30, 2014, according to a draft version of an audit conducted by the St. Louis Comptroller's Office.

The expenses included reimbursements to employees for restaurant, travel and hotel bills during conventions, as well as picking up the tab at meetings with vendors. According to the audit, which was acquired by Daily RFT through a Sunshine Request, Carpenter payed for those items by tapping the Technology and Archival Account, a fund whose usage is restricted under state statute to "record storage, microfilming, and preservation, including anything necessarily thereto."

Notably, the draft of the audit makes no mention of the nepotism allegations that led to Carpenter's resignation in July, or the fact that Carpenter -- who was first appointed to recorder in 1980 -- withdrew roughly $12,000 from the Technology and Archival Account to pay her great-nephew's intern salary and parking costs.

Carpenter is currently campaigning to retake her old job, and tomorrow her name will be listed on ballots across St. Louis as the Democratic candidate for Recorder of Deeds. Her main opponent is Jennifer Florida, a former Democratic alderwoman whom the mayor appointed as recorder following Carpenter's resignation. Florida wasn't on the ballot for the August primary, so she's been forced to run as an independent candidate.

The draft of the audit was shocking, Florida tells Daily RFT. A copy of the audit (embedded below) bears her handwriting on the second page, noting the omission of Carpenter's payments to her great-nephew.

"The reason I'm the recorder is because the former recorder violated the state constitution, so I thought it was really odd that they acknowledged that the [Technology and Archival Account] has historically been misspent and didn't fall within the category of preservation, but they omit that she used the fund to pay her great-nephew's salary thousands of dollars over a period of time," she says. "From a good government perspective, we requested the internal audit because of that."

The bulk of improper expenses, around $105,000, were used for office renovations, but the auditors found that "a tour of the Recorder of Deed's Office space revealed these renovations did not occur in spaces where the bulk of records are stored."

Among the rest of the audit's findings was the lack of a formal bid and procurement process for the office. The audit mentions an earlier investigation by the City Counselor's office that found Carpenter's former chief deputy, Peggy Meeker, had gamed the city's bidding process to direct about $250,000 worth of renovation work to Meeker's son's contracting company.

We've reached out to Sharon Carpenter, and we'll update the story if we hear back.

Here's the full text of the audit draft.