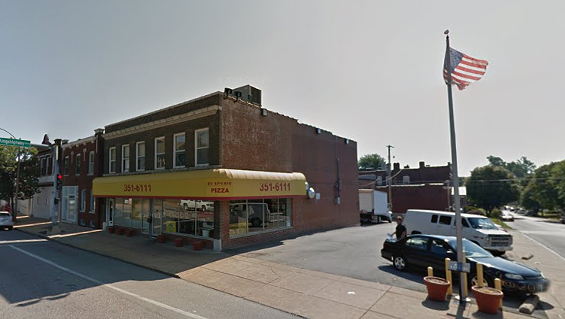 The owner of an Elicia's Pizza shot one, maybe both, of the gunmen who tried to rob the south St. Louis city restaurant early Sunday morning.

The thieves announced a robbery at 12:20 a.m. in the pizza chain's Boulevard Heights location, at 6656 Gravois Avenue. One of the robbers kept a gun pointed at the owner while the other, a 28-year-old man, walked behind the counter and stole money from the register, according to St. Louis Metropolitan Police.

Even with a weapon trained on him, the restaurant owner -- who has a valid concealed carry license, police said -- managed to retrieve his own gun and start firing at the robber at the cash register, striking him in the leg and buttocks. The suspect collapsed outside the restaurant trying to flee.

And if that weren't enough, the owner says he also struck the second suspect during the gunfight, but police couldn't find any evidence he was injured. Police said the escaped robber fled east on Gravois Avenue and possibly entered a maroon minivan.

Police recovered the shot suspect's gun and the money taken in the robbery.

The two suspects entered the business, both displaying handguns and announced a robbery. Suspect #1 walked behind the counter and began removing money from the register while Suspect #2 held a gun on the business owner. The owner, who has a valid CCW permit, was able to retrieve his own gun and exchanged gunfire with Suspect #1 before both suspects fled the business. Suspect #1 collapsed outside of the business after sustaining gunshot wounds to his leg and buttocks. Suspect #2 fled east on Gravois and possibly entered a maroon minivan. Suspect #1 was conveyed to the hospital where he was listed as stable. The owner believes that he also shot Suspect #2, however, no evidence was located that confirms the suspect was shot. Suspect #1's gun along with currency taken in the robbery was recovered at the scene. The investigation is ongoing.