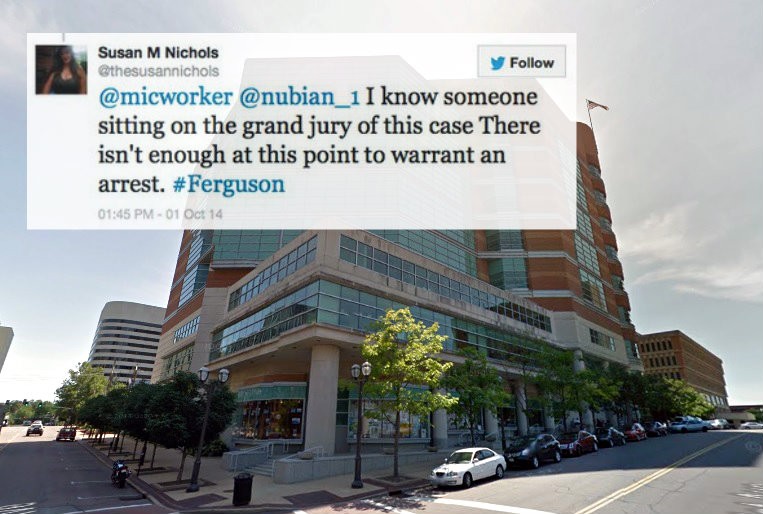 "I know someone sitting on the grand jury in this case," it read. "There isn't enough at this point to warrant an arrest #Ferguson."

Although it was deleted within moments, eagle-eyed activists quickly screen-grabbed it and began asking why a member of the grand jury in the Michael Brown shooting was blabbing about the closed court proceedings to a friend, who was then unwisely sharing the insights on Twitter. When St. Louis Prosecutor Bob McCulloch's office contacted the woman -- according to her profile, her name is Susan M. Nichols -- she claimed her account was "hacked."

Late yesterday, McCulloch released the results of his inquiry and agreed that she had indeed been hacked. However, it turns out that it's not at all clear where the tweet came from, and McCulloch's conclusions rest mainly on Nichols' word.

Here's the statement issued by McCulloch yesterday afternoon in regard to @thesusannichols:

Recently several concerns have been raised about information being "leaked" from the grand jury. First, no information or evidence has been released by the grand jury. A tweet several weeks ago claimed the author talked to a friend who is serving on the GJ about the case. That did not happen. An investigation revealed that the account had, indeed, been hacked and the origin/author of the tweet is unknown. The owner of the account has no connection with any member of the grand jury.

Earlier this month, McCulloch spokesman Ed Magee told Daily RFT that their office was awaiting records they'd subpoenaed in order to determine if @thesusannichols was hacked. However, in a conversation yesterday, Magee said the determination that Nichols was hacked was made based on the fact that a computer she provided for forensic examination had not been used in "months." No other electronic device, including Nichols' phone, was examined. Magee said Twitter was unable to provide them with any records that include IP addresses. Twitter's own support site says that the social-media site "retains different types of information for different time periods. Given Twitter's real-time nature, some information (e.g., IP logs) may only be stored for a very brief period of time."

Magee said they also spoke to each member of the grand jury, and they all denied knowing Nichols. He confirmed that the avatar image that once appeared along with the account name @thesusannichols really was Nichols, but that the tweets coming from the account were not hers.

"It just went nowhere real quick," Magee said of the investigation, and he was quick to point out that the tweet from Nichols' account didn't truly contain any privileged information.

He also claimed no knowledge of the account that @thesusannichols switched to -- her new handle appears to be @smde7763 and this new account contains archives of tweets from @thesusannichols going back several years. Many of the tweets taunt Ferguson protesters and members of the media (including our own Danny Wicentowski) and proclaim support for officer Darren Wilson.