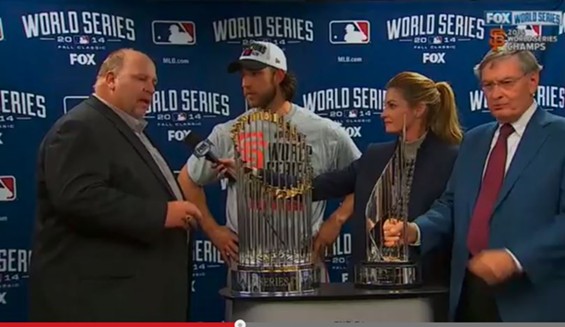 If you hurled your television out the window last night in angry disappointment when the San Francisco Giants won the 2014 World Series and dashed the hopes of a nation of Kansas City Royals fans/bandwagon joiners, you missed something delightfully awkward.

Rikk Wilde, an executive at Chevrolet, had the seemingly simple task of awarding Giants pitcher Madison Bumgarner with the World Series MVP award and a 2015 Chevrolet Colorado.

But in a performance that have many clamoring to name him the MVP of awkwardness, Wilde faltered and sweated over his lines, taking long pauses and checking his notes.

Here's how Wilde hyped the Colorado, which was recalled this month due to a defective airbag, in a stammering speech to a stoic Bumgarner:

"Um, it combines class-winning and leading, um, you know, technology and stuff with, uh, WiFi powered by OnStar," Wilde says while someone in the control booth mercifully cuts away from him to a shot of the truck.

That's two "ums" and one "uh." According to The Washington Post's count (because this is what journalists do now, apparently), Wilde had a total of seven "uhs" and four "ums."

Yall leave the Chevy guy alone. He did a great job. You'd be nervous as hell too!

As someone who doesn't like speaking in front of big crowds I totally feel for Chevy dude.

Yall have a heart. Besides, he just sold some damn Chevys. %powermove %chevyguy

So hats off to Long for showing some class on Twitter last night. Now if you'll excuse us, we're going to watch Wilde's speech a million more times on YouTube and stuff.