Columnist Calls Michael Brown an Animal for Darren Wilson to "Put Down," Then Deletes It 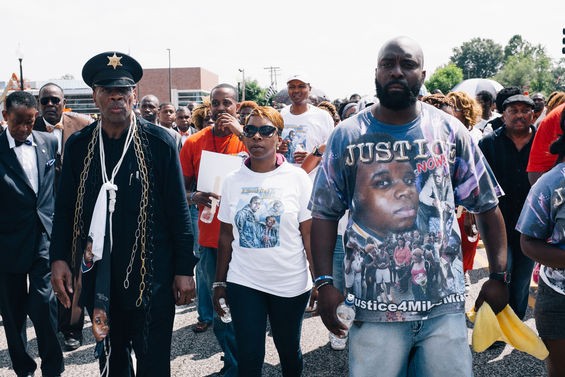 A columnist from a newspaper in Charleston, West Virginia, deleted a personal blog post -- which referred to Michael Brown's death as "put[ting] this animal down" -- after it started drawing attention online.

Don Surber, who writes editorials for the Charleston Daily Mail, originally wrote that Brown was a "gigantic thug who was higher than a kite" and that Ferguson police officer Darren Wilson "had to put this animal down" in a post called "Why I Stop Listening When You Say Police Brutality." Surber uses Brown's death to share his opinion that police should be heavily equipped to fight against "the hundred thousand or so thugs" who threaten "decent people."

Update: The Mail has fired Surber from the paper, saying the wording of his blog post was "unfortunate, inflammatory and, in our view, indefensible." Surber re-published the blog post without the offensive bits, also saying that "readers who want to carry this on forever should be ashamed of themselves." Our original story continues below.

"If Ferguson proved anything, it is that police indeed need riot gear, including grenade launchers to shoot tear gas cannisters," Surber writes. "I want the guys who are willing to take a bullet for me to be armed. Well armed."

The next day, Surber inserted a correction into the post, admitting that Brown was, indeed, a human being and not an animal. Here's the text of the correction:

UPDATE: I made a factual error. Michael Brown was not an animal but a man. Big. Brutal. High. His death was a justifiable homicide and not a putting down.

On Tuesday, Surber pulled his blog post completely offline. Well, not completely. Thanks to the wonders of the Internet, his post lives on in Google cache.

Brad McElhinny, editor of the Daily Mail, says the editorial would not have been approved to be printed in the newspaper because Surber's language was "not careful, not acceptable." But that won't stop people from associating Surber's stance with the Daily Mail.

"We're not dumb. We realize that what Don has said on the Internet reflects on the paper," he tells Daily RFT.

Staff are still talking about the possibility of halting Surber's columns in the paper, though the Daily Mail doesn't typically editorialize on social issues, McElhinny says.

The second half of Surber's post is dedicated to stories about police officers killed in the line of duty.

"Not every cop is a good guy. I get that. But the real cases of brutality overwhelmingly are against the police," Surber writes. He continues, "This is the brutality I protest."

Ass Clown of the Week Ferguson