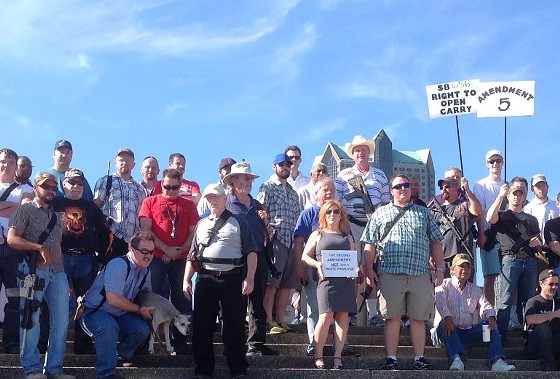 Own a gun in Missouri? Legally? With a concealed carry license? Well, congratulations are in order, because you can open carry that gun all you want, seemingly anywhere, and nobody -- not St. Louis mayor Francis Slay, state legislators or the cops -- will stop you.

That's the takeaway from Saturday's open carry demonstration through Citygarden and the Gateway Arch, which attracted around 50 local and out-of-state activists to the heart of downtown St. Louis. Participants wore holstered pistols or carried long rifles slung over the shoulder, drawing both stares from passing tourists and the ire of the city's mayor.

"What you saw on the streets of downtown St. Louis today was like a scene out of a bad Western," Slay said during press conference Saturday afternoon. "We can dismiss the people who protested this morning as extremists who should not be taken seriously. I agree with that. But we have to take this law seriously."

The law Slay was referring to is SB 656, a bill Republican legislators stuffed with a hodgepodge of new gun measures that went into effect October 11. Among other things, the bill lowered the age for obtaining a concealed carry permit from 21 to 19 and set guidelines for arming classroom teachers. The bill also eradicated all local bans on open carrying firearms.

But the scope of SB 656 is confusing and overly broad, Slay argued. He pointed to the gun-filled gathering at the Gateway Arch as proof the law goes too far.

"It's very hard for me to believe that intelligent and supposedly responsible legislators that were elected by the people would allow this to happen," he said.

The walk drew a roughly equal number of counter-protesters, many of whom were in town for Amnesty International's Midwest conference. About eight St. Louis police officers, some wearing yellow vests, watched the walk from a distance and did not check for concealed carry permits, according St. Louis Public Radio.

This woman wasn't too pleased with people flashing their pieces in St. Louis.

I love this lady!!! She showed up with her flag & her sign to counter the open carry event in #StL today. #moleg pic.twitter.com/v76dRz3gA1

Aside from the guns and counter-protesters drawing outlines of human bodies in chalk on the sidewalk, the event could have passed for a leisurely group outing on an unseasonably warm day.

But the walk wasn't just about showing off SB 656. In August, 60 percent of Missouri voters chose to pass Amendment 5, which added new language to the state's constitutional gun laws, declaring them "unalienable" rights and, more tangibly, enshrining current gun laws with the toughest standard of judicial protection.

Jeffry Smith, an Ohio gun activist who organized the walk, previously told Daily RFT that he believes Amendment 5 makes SB 656 moot, and that any legal gun owner in the state can open carry, even without a concealed carry permit.

During Saturday's press conference, Slay called on voters to pressure their elected officials to repeal the "bad laws" that, so far, have opened the state's gun laws wide open. But changing those laws won't be easy. State representative Stacey Newman, who joined Slay at the press conference, said pro-gun regulation lawmakers are far outnumbered in the General Assembly, and knocking Amendment 5 from the state's constitution would require a citizen petition.

"More guns is not the answer," she said. "We need to restrict gun ownership by those who shouldn't have them, and my focus is still universal background checks."

As for Smith, he said Saturday's walk is just the first step in publicly exploring Missouri's open carry gun laws. On the walk's Facebook page Sunday, he teased his gun-loving compatriots with the possibility of a "second annual" open carry event in St. Louis. He didn't go into specifics on future demonstrations, but he told Daily RFT his research is "ongoing."