Taveras' agent confirmed his death to reporters in the Dominican Republic, saying Taveras was driving from Sousa to Puerto Plata when he and his girlfriend died, according to Dominican baseball website LigaDom.com.

No other details were immediately available Sunday night. After offering condolences to Taveras' family, general manager John Mozeliak said he was waiting for more details before issuing a public statement released this statement::

"I simply can't believe it," said Mozeliak. "I first met Oscar when he was 16 years old and will forever remember him as a wonderful young man who was a gifted athlete with an infectious love for life who lived every day to the fullest."

"Oscar was an amazing talent with a bright future who was taken from us well before his time," Cardinals chairman Bill DeWitt Jr. said. "Our thoughts and prayers are with his family and friends tonight."

Brian Mejia Oscar Taveras' agent has confirmed to various Dominican reporters that the player has been declared dead. pic.twitter.com/52kxLRXeMN

Taveras "seemingly had the world out in front of him," as Joe Buck commented after an announcement during World Series Game 5. Described as a strong hitter with superstar potential, Taveras was ranked as No. 1 minor league prospect by prominent baseball outlets Baseball American and mlb.com. In 2012, he was named the Cardinals' Minor League Player of the Year.

"I think he can be a star," manager Mike Matheny told the St. Louis Post-Dispatch about Taveras earlier this month.

Update, 11:30 a.m.: Matheny has issued his own statement on Taveras' death:

I was asked last night to give some words regarding the tragic death of Oscar Taveras, but I just simply couldn't.

First of all, it felt like a bad dream that could not be real, and when reality kicked in, my words didn't even seem to make sense. To say this is a horrible loss of a life ended too soon would be an understatement. To talk about the potential of his abilities seemed to be untimely. All I wanted to do was get the guys together and be with our baseball family. I know the hurt that comes along with buying into the brotherhood of a baseball team. That hurt is just as powerful as the joys that come with this life. Not to say it is even close to the depth of pain his true family is going through, but the pain itself is just as real. The ache is deep because the relationships were deep, and forged through time and trials.

To the many fans who have already reached out with condolences, and to the many more who are in mourning, thank you for taking these players in, like they are one of your own. This level of care is what sets our fans apart.

In my opinion, the word "love" is the most misused, and misunderstood word in the English language. It is not popular for men to use this word, and even less popular for athletes. But, there is not a more accurate word for how a group of men share a deep and genuine concern for each other. We loved Oscar, and he loved us. That is what a team does, that is what a family does. You will be missed, Oscar.

Taveras played 80 games with the Cardinals, including Game 2 of the NLCS against the San Francisco Giants, when he hit this exciting home run:

Daily RFT was quick to pick Taveras out as a rising star. Here's what writer Aaron Schafer said in a June 2012 story, "The Legend of Oscar Taveras:"

Well, seeing as how you're such a big Cards fan, I'm going to just go ahead and tell you right now you'll probably want to start saving your nickels (people still use nickels, right?), to buy yourself an Oscar Taveras jersey. 'Cause he just might be pretty good at this whole baseball thing. 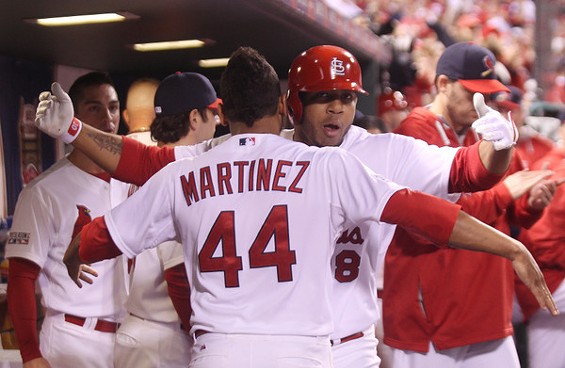 Thanks for all the fan support!

...who were stunned and saddened by his death.

Less than a month ago. Unbelievable. RT @el_fenomeno_18: Thank you God! My first postseason! pic.twitter.com/n52yWGztlY

RIP, Oscar Taveras. You were loved by Cardinal Nation.

It's saddest to see a star extinguished just as it starts to shine. We'll never know how bright it could be on this side. RIP Oscar Taveras