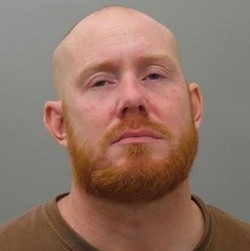 According to reports from police, Walther entered the Circle K gas station at 9311 S. Broadway Monday, pointed a handgun at the clerk and took an undisclosed amount of cash before fleeing. Witnesses told police which way Walther headed, and cops found him "lying in a ditch" near the River City Casino.

As they arrested Walther, officers found a fully loaded handgun underneath his abdomen and the stolen cash from Circle K in his pocket.

Here's the report from police:

On Monday, October 20, 2014, officers from the St. Louis County Police Department's South County Precinct responded to the Circle K located at 9311 S. Broadway for a report of an armed robbery. The suspect entered the gas station, pointed a handgun at the clerk, and demanded money before fleeing the scene with an undisclosed amount of cash. The suspect was captured by responding officers after receiving information from witnesses in the area who had seen the suspect running from the scene. The suspect was located lying in a ditch near River City Casino Blvd. The suspect was subsequently taken into custody without incident. While taking Walther in custody, the officers seized a fully loaded handgun that was located underneath Walther's abdomen. They also seized the cash stolen from the Circle K located in Walther's pocket.