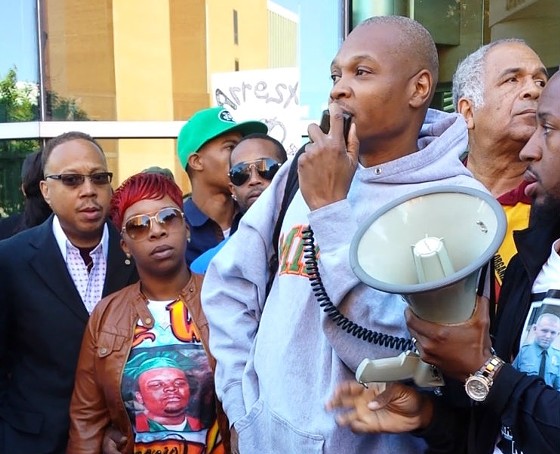 The family of eighteen-year-old Michael Brown first heard about leaked information from the investigation into the teenager's August 9 shooting death on Friday. A family pastor called the father, Michael Brown Sr., to tell him about a story in the New York Times ("Police Officer in Ferguson is Said to Recount a Struggle").

Soon, both sides of the family were calling one another, reacting to subsequent articles in the St. Louis Post-Dispatch ("Source: Darren Wilson says Michael Brown kept charging at him") and the Washington Post ("Evidence supports officer's account of shooting in Ferguson"). All three credit unnamed sources and include a St. Louis County medical examiner's autopsy report on Brown Jr., as well as the account of the shooting given by Officer Darren Wilson to a grand jury. Most of the details included in the stories seem to point to a justified shooting (read more about those stories here).

Daily RFT reached Eric Davis, Brown Jr.'s cousin, and a family spokesman, to get their reaction to the leaks. Davis talked about the conversations he's had with Lesley McSpadden, Brown Jr.'s mother, since reports began appearing.

"We've asked from the inception of this investigation to have Bob McCulloch recuse himself and have an independent investigator assigned," he said. "What we feared would be happening with the case being here, with the leaks, is actually happening. We just feel like there's bias toward the police officer."

See also: Ferguson Protesters React to Leaked Darren Wilson Testimony, Michael Brown Autopsy Davis said the family wants to know why none of the leaked information points to any possible culpability on Wilson's part -- specifically why he shot as many times as he did outside of his vehicle, his toxicology report or his record as a police officer prior to joining the Ferguson department. They're also very concerned about how the new accounts differ from the initial narrative provided by Ferguson police chief Tom Jackson, saying, "It's like they're fabricating the story as they go along." He called their investigation "bungled."

"It's becoming more than a leak," said Davis. "We feel like there's been a lot of things to manipulate the public opinion on this case and that's why we've continually asked that we receive a different prosecutor for this case."

Davis said the family is very suspicious of McCulloch's office as a possible source of the leaks, though McCulloch has repeatedly denied that. The New York Times cited "government officials briefed on the federal civil rights investigation" and other accounts name "a federal official," which touched off speculation that the information came from U.S. Department of Justice officials tasked with their own civil-rights investigation into the shooting.

Davis said McSpadden asked her DOJ contacts about their involvement and was satisfied with the statement from Attorney General Eric Holder's office calling the leaks "irresponsible," "highly troubling" and "an inappropriate effort to influence public opinion about this case."

"DOJ officials -- they felt like they were being leaked locally," Davis said. "We have a lot of confidence in [Holder], but it's very disheartening that this is going on with such a high-profile case, and this is the highest law office in the land. We can't get any higher, and these leaks are coming, and it doesn't make us feel very good at all."

Davis pointed to witness statements that agreed there was a scuffle at the window of Wilson's police vehicle, but that Wilson was the instigator. He said he doesn't understand why Wilson's testimony is carrying so much weight in public opinion, while a Jefferson County construction worker who told the grand jury (and privately, the Brown family) that he saw their son with his hands in the air before being gunned down.

Still, despite the fact that many have speculated that the deluge of leaked classified information means authorities are preparing the public for a "no indictment" announcement from the grand jury, Davis said neither he, nor McSpadden, nor their attorneys, are expecting anything less than a first-degree murder charge.

"We haven't really had that conversation because we feel like the evidence -- any blind man can see what's going on," Davis said. "We have a paid murderer walking the streets."

Meanwhile, he said the family no longer trusts media, and is relying on themselves, their attorneys, the NAACP, the ACLU and Reverend Al Sharpton for help. On top of everything else, he said, McSpadden has been receiving racist hate mail.

"It's very, very difficult. [Lesley] is very distraught. She has been dealing with this for over two months, not knowing why this officer murdered and executed her child," Davis said.