The investigation into the death of Michael Brown has sprung a leak.

Three leaks, in fact. First, the New York Times published details from the Ferguson police officer who fatally shot Brown, Darren Wilson. The St. Louis Post-Dispatch then got its hands on the official autopsy. And finally the Washington Post announced that several black witnesses have given testimony that matches Wilson's version of events.

See also: Darren Wilson Tells Why He Feared For His Life Before Shooting Michael Brown: NYT

After months of keeping a tight lid on the grand jury and civil rights investigations into Brown's death, the leaks feel like a little more than coincidence, especially as the city braces for the potential violence if Wilson is not indicted with a charge in Brown's death.

So what's really going on here? The Department of Justice said it best, to the Los Angeles Times: "The department considers the selective release of information in this investigation to be irresponsible and highly troubling. Since the release of the convenience-store footage, there seems to be an inappropriate effort to influence public opinion about this case."

(Need a reminder on what the convenience store footage was all about? Read our story: Michael Brown Police Report: Photos Suggest Robbery Beforehand, Limited Other Details)

The St. Louis American, a local newspaper aimed at black readers, denounced the reports from anonymous sources as "anonymous third-party hearsay" and criticized the editors at the Post, the Times and the Post-Dispatch for "show[ing] a lapse in judgement and ethics that is not only shameful but actually dangerous.

"We declare a mistrial in the court of public opinion," the American says in an editorial.

So if the person(s) leaking reports to local and national press are trying to affect public opinion, is it working? What do Ferguson protesters and Brown family supporters think now, as unofficial reports seem to support Wilson's account of what happened on Canfield Drive on August 9?

Daily RFT reached out to some of the familiar faces at protests and Brown family gatherings over the last few months. Here's what they have to say:

While St. Louis fears the uproar that a non-indictment of Wilson would bring, Pastor Carlton Lee has a different fear.

"My biggest fear throughout this is there will not be any justice served for Michael Brown," says Lee, who counsels Michael Brown Sr., and his wife, Cal, at the church they attend. Lee may be a man of faith, but he says he has no faith in America's judicial system after witnessing how it hurts people.

"From a pastoral view I want to believe the family will get justice," he continues. "From the reality of it, I'm going to be honest, I don't see it. I don't see it, and that scares me."

Lee called the New York Times report leaking details of Wilson's testimony "a slap in the face" to the family. Lee says Brown Sr., the father of Michael Brown, told him, "The way I really feel is they walked up to my son's grave, spit on his grave and desecrated his grave."

"All this information that's being released, it's completely negative in regards to his child," Lee says. "You would think that if you never met Michael Brown Jr., you'd think Michael Brown Jr., was some aggressive thug, and it wasn't the case at all."

Louis Wilson, a Ferguson resident of fifteen years and founder of the One Love Coalition, is skeptical that the trickling release of grand-jury testimony is an accident or coincidence.

"I don't think they're leaks," he tells Daily RFT. "I truly believe they're systematic calculations of release of information." 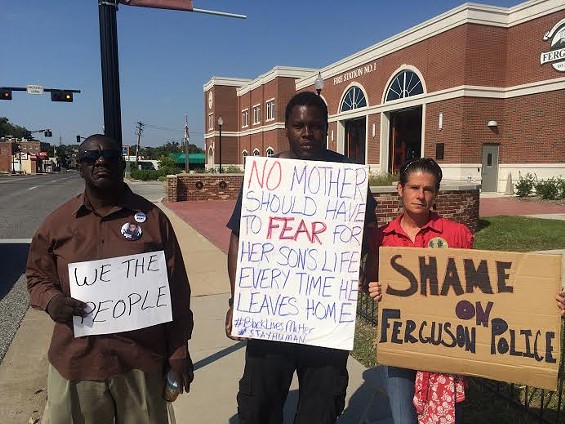 "The moment they said Brown tried to take Wilson's gun, they knew they weren't going to charge Darren Wilson," he says. "The reason the grand jury is taking so long is they're giving the people time to cool off. And now they're realizing the people aren't going to cool off.... How long can you actually put it off without the dumbest of the dumb saying, 'OK, you're pulling something over on me now.'"

Wilson, 59, who has been a regular peaceful protester throughout Ferguson since Brown's death, says the root of the problem, and what many protesters are mad about, is oppression of black people. Voting is the only way to change the status quo, he says.

"There's only one thing blacks haven't tried, and that's registering en masse, voting en masse and getting people in office that actually serve the people and don't serve big money," he says. "If that doesn't finally end the oppression of black people in America, then I won't know what to do."

Hear from more protesters and Brown family supporters on page two. Umar Lee, who's been arrested while protesting in Ferguson, says leaked details from the investigation don't change his opinion of what went down between Wilson and Brown on that fated August afternoon.

"I never for one minute ever expected an indictment of Darren Wilson," Lee tells Daily RFT. "I think what we're hearing right now is a campaign of leaks. They're trying to prepare the community for the announcement of a non-indictment."

Lee says he hears two different things on the streets: that the grand jury's decision will be postponed until after the November elections, or that the recent leaks mean the decision is coming down any day now.

Lee says the leaked reports didn't answer the questions he still has about the case, such as: Did Wilson and Brown meet before August 9? Did Brown know Wilson's girlfriend? And why did Wilson continue shooting at unarmed Brown even when he was feet away from his police car?

"We know that Michael Brown was unarmed," Lee says. "If they had a situation, there would have been many other ways to diffuse the situation other than firing off numerous rounds at Michael Brown."

Lee says the leaks aren't over.

"It's all coordinated, it's all part of a strategy, and it's going to keep coming," Lee says. "Whatever is going to happen, I want it to happen. Let's get it over with."

Romona Taylor Williams, an organizer of the Occupy Saint Louis University movement and an organizer with Metro St. Louis Coalition for Inclusion and Equity, says she has no faith whatsoever in the local grand-jury investigation.

"Why did it even go to the grand jury? The prosecutors should have brought charges against this man," she says.

"The audience that the story was directed was definitely not the black community, that's for sure," Williams says. "I think that it was put out in the event that the grand jury comes back with a decision not to indict...so they do a character assassination on Mike Brown. And it's just not going to work, because, first of all, we have no trust whatsoever in this investigative process. None."

Williams says if Wilson is cleared and violence erupts, the police will be to blame.

"I think that the outcome of those protests is going to be contingent a lot upon how the police respond," she says. "If they are going to respond the way that they did after Michael Brown was killed, and how they attacked and brought all this military equipment -- well, they're inciting riots. People like to protest in America. That's our constitutional right, we will exercise our constitutional right, and we will do it peacefully. But the police have to back off our children."

Natasha Johnson has been in front of the Ferguson police station every day since the first week of protests over Michael Brown's death. Johnson says she hasn't paid much attention to the recently released bits of Wilson's testimony.

"I'm just ready for this to get over with," she says. "I don't know what they're waiting for to release the information. They're not going to indict him."

Johnson suspects that if Wilson is not indicted, the fury from protesters will spill over outside of Ferguson.

"Oh there's going to be some problems. They're going to tear the city up, and it's not just going to be Ferguson," she tells Daily RFT.

Johnson has been protesting peacefully during the day and going home at night, but she knows what some fellow protesters are capable of.