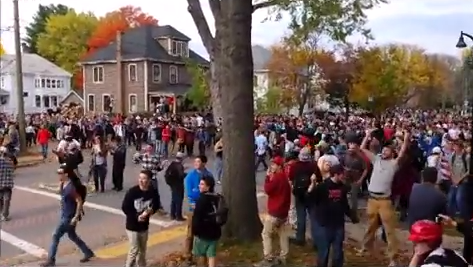 Clouds of tear gas. Cars overturned. Street signs torn down. Fires in the streets. Helicopters circling. Scores of arrests and injuries -- It all sounds a little like a Ferguson protest.

But it's not. While Ferguson and Shaw demonstrators made it through the weekend without any massive disruptions, the mostly white (and clearly drunk) students at Keene State College in New Hampshire lost their shit Saturday night at violent parties near an annual pumpkin festival where families try to set a world record for the largest number of lighted jack-o-lanterns in one place.

The Keene Pumpkin Fest riot and the weekslong demonstrations in Ferguson and St. Louis don't have much in common: Ferguson protesters say they're organizing against institutionalized racism and police brutality and won't stop until demands -- like the indictment of Officer Darren Wilson -- are met, while Keene students seemed to just jump on a wave of destruction that probably smelled like a popular spiced latte.

But that didn't halt comparisons between how the media and conservatives responded to the pumpkin-festival riots after months of analyzing every detail of protests in Ferguson. And the comparisons aren't pretty.

#Ferguson stay strong. We know it's unfair the pumpkin fools will be painted as kids being kids while we "destroy". But don't get off track.

So Daily RFT had to wonder: What would it look like if Keene State rioters were judged by the same racially charged, dismissive stereotypes we've seen applied to Ferguson and Shaw protesters? Luckily, Twitter was on the case.

Here are racially based stereotypes typically aimed at protesters in Ferguson and Shaw demonstrations applied to all those rioters in the New Hampshire Pumpkin Festival craziness:

"Blame it on the fathers."

How many of the defiant white youth causing mayhem & destruction come from fatherless families? #PumpkinRiot

"I don't understand what he's doing with his hands. OMG IS THAT A GANG SIGN?"

"What kind of monsters would destroy their own neighborhoods?"

White people in New Hampshire really need to do some self-reflection and regulate their animal impulses in the wake of #keenepumpkinfest.

"Why are they tearing up their own community?" #keenepumpkinfest

If white people continue to glorify pumpkin violence in their culture they deserve the spice-latte thug stereotypes. pic.twitter.com/VI8USeI9Mq

do these animals have jobs #pumpkinfest #ferguson destroying property ... pic.twitter.com/Owd6Ldpoi7

"They can't even be trusted to stand still peacefully."

Everybody keep moving in the pumpkin patch. It's for your safety. #5secondrule #Ferguson #pumpkinfest

"They're not exactly boy scouts."

These are no angels. RT @raywert: Look at these thug gang-bangers in Keene, NH. #pumpkinfest pic.twitter.com/4kCJau0mlY

"Maybe some of them will calm down long enough to listen to what I think."

Where are the leaders in the white community? They need to speak out #pumpkinfest

The pumpkin-consuming community needs to be loud and clear with their condemnation of this behavior. Trust me, I'm an expert.

I think if nothing else, this will start a much needed dialogue on pumpkin relations in America. #pumpkinfest