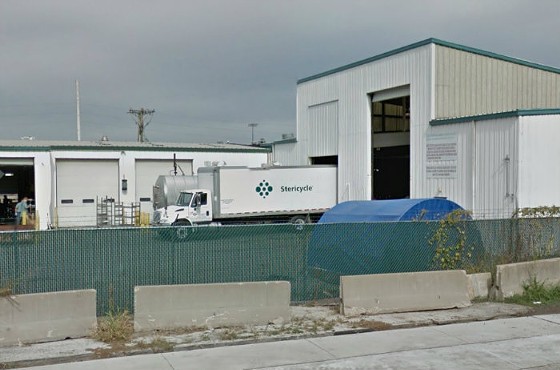 Update 3:45 p.m.: Daily RFT just received this statement from Stericycle: Stericycle has reached a voluntary agreement with the Missouri Attorney General confirming that it has not and will not accept, store or treat Ebola-contaminated waste in its St. Louis facility. Should healthcare facilities in Missouri encounter a suspected or confirmed Ebola case, Stericycle will be available to work with these facilities to find other disposal options. At present, each Ebola waste generating incident is being handled on a case-by-case basis with primary emphasis placed on protecting the general public, healthcare workers, and our team members.

A medical waste management facility in north St. Louis has applied for permits that would allow it transport and dispose of material that's been in contact with the Ebola virus, according to a press release from Missouri Attorney General Chris Koster's office this morning. A copy of the permit application provided by Koster's office says it is a "special permit [which] authorizes the transportation in commerce of certain Ebola-contaminated medical waste for autoclaving or incineration."

Now Koster is trying to block the facility, Stericycle, from bringing Ebola waste to St. Louis because the company has violated the Missouri Solid Waste Management law several times.

"This facility has a history of violations in the handling of medical waste," Koster writes in the release. "We should not allow this company to transport Ebola waste into our state without absolute assurances of safety."

Maggie Crane, spokeswoman for Mayor Francis Slay, says that their office has been apprised of the application to handle Ebola waste and that St. Louis City Health Department director Pam Walker is handing the situation.

We've left messages at Stericycle's corporate headquarters seeking response and will update when we hear back. Here is a copy of the Stericycle petition, which enumerates the kinds of waste that would be accepted at the facility and the kind of packaging it would arrive in:

St. Louis, Mo. - Missouri Attorney General Chris Koster today announced that he filed an application for a temporary restraining order prohibiting a facility in north St. Louis operated by Stericycle, Inc. from accepting medical waste contaminated with the Ebola virus. On October 8, the facility received permits from the federal government to transport and dispose of Ebola-infected material.

Koster filed a petition in the Circuit Court of St. Louis, asking the court to block the facility from accepting any infectious material that is, or could be, contaminated with the Ebola virus. He further asked the court to assess penalties for previous violations of the Missouri Solid Waste Management law.

According to Koster, a three-year independent compliance review between 2009 and 2013 found numerous violations of Missouri law at the Stericycle facility. These included failure to test and properly operate infectious waste treatment equipment, failure to account for and treat infectious material in a timely fashion, and failure to keep proper documentation tracking infectious materials.

"This facility has a history of violations in the handling of medical waste," said Koster. "We should not allow this company to transport Ebola waste into our state without absolute assurances of safety."