Phyllis Schlafly: Obama Let Ebola into America So We'll Be More Like Africa 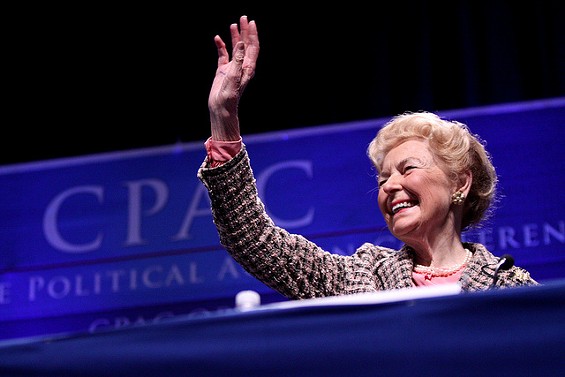 Schlafly says Obama purposefully allowed Ebola-infected people into America because he wants the U.S. to look more like the rest of the world.

"Obama doesn't want America to believe that we're exceptional," Schlafly says in an interview with the right-leaning WorldNetDaily. "He wants us to be just like everybody else, and if Africa is suffering from Ebola, we ought to join the group and be suffering from it, too. That's his attitude."

It's a line of logic we've come to expect from the hyper-conservative Schlafly, who once sued her nephew-by-marriage, brewery cofounder Tom Schlafly, over using their last name for his beer because -- thanks to her -- the name "has the connotation of conservative values, which to millions of Americans (such as Baptists and Mormons) means abstinence from alcohol."

See also: Phyllis Schlafly: The Problem With Gays? "They Are Trying to Make Us Respect Them"

This time, Schlafly has taken a break from denouncing the Violence Against Women Act for promoting divorce and man-hating or scoffing at gay people for "mak[ing] us respect them" to take on the president now that the highly contagious Ebola virus has spread in America.

"There are all kinds of diseases in the rest of the world, and we don't want them in this country," Schlafly tells WND. "And it's Obama's job to keep them out."

Thomas Eric Duncan arrived in Dallas from his home in Liberia on September 20 and became ill from Ebola a few days later. He showed no symptoms of the disease when he left for the U.S., officials said. He died in the hospital on October 8, and since then, two healthcare workers have been diagnosed with the disease -- the first ever transmissions of the disease on American soil.

"Out of all the things he's done, I think this thing of letting these diseased people into this country to infect our own people is just the most outrageous of all," she continues.

Schlafly, who received an honorary doctorate degree from Washington University (to the displeasure of many students), harkens back to the good ol' days when screeners at Ellis Island determined who was too sick to enter the country.

"That was the purpose of Ellis Island -- to have a waiting place where it was decided whether people were healthy enough or responsible enough to come into our country," she says to WND. "The idea that anybody can just walk in and carry this disease with them is just an outrage, and it is Obama's fault because he's responsible for doing it."

Daily RFT can only hope Schlafly takes a page from the book of fellow Ebola conspiracy theorist Chris Brown, who tweeted this...

I don't know ... But I think this Ebola epidemic is a form of population control. Shit is getting crazy bruh.

...and then tweeted this when his fans criticized him:

Let me shut my black ass up!